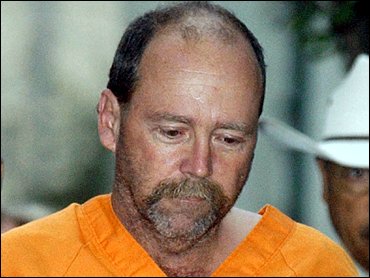 More than two weeks after a Mississippi family of three vanished on Valentine's Day, authorities found their bodies in a wooded area and charged the father's cousin with capital murder.

Prosecutors now say they believe the suspect went to the cousin's house with the intent of kidnapping the family, reports CBS News Correspondent Cynthia Bowers. They still won't say for sure how the three died but they do say somewhere along the way, something went very, very wrong.

Teams of law officers using portable lights searched through scattered rain and into the evening hours. What they found there ended an intense search that began Feb. 14 when Michael Hargon, 27, his 29-year-old wife Rebecca and their 4-year-old son, James Patrick, went missing.

The bodies were pulled from a shallow grave about 100 miles from their home.

An autopsy was scheduled for late Monday night or Tuesday.

"It's awful. You deal with bad stuff all the time but rarely where the whole family was killed," District Attorney James Powell said.

Bill Hirtz, Rebecca Hargon's father, said the discovery gave him a measure of solace. "At least I know where they were at," he said Monday night by telephone.

"We were stunned that anything like this could happen in our small community," said Rev. George Butler, family pastor.

In a Yazoo County courthouse, while authorities were still searching for the bodies about 100 miles away, Earnest Lee Hargon — a cousin of Michael Hargon — heard the three capital murder charges read and was ordered held without bond. Friends and relatives of the family, many visibly shaken, attended the brief court appearance.

Blood and spent bullet casings were discovered at the family's home in Yazoo County after their disappearance. Investigators have not found a .22-caliber weapon that apparently was fired in the house.

Powell said the slayings occurred during the kidnapping of one or more of Michael Hargon's family. He said Hargon had acted alone.

"We've been saying all along since we've anticipated filing these charges that our case is rock solid," said Warren Strain, spokesman for the Mississippi Highway Patrol.

Investigators have been checking a piece of land that Michael Hargon recently inherited from his uncle, Charles Hargon, to determine if it is linked to the disappearance, said Jennifer Hargon, Michael's sister.

Earnest Hargon, Charles Hargon's adopted son, was not included in the will, she said. Strain said the property is a consideration in the case, but not necessarily a motive.

"It could be a potential motive, but it's not the only one," Strain said.

"I don't have to have a motive in this case," said Powell. "All I have to do is prove he killed them."

Family members at the hearing declined to discuss the deaths. Louis Fischer, Michael Hargon's first cousin, screamed a profanity at Hargon after being turned away from the crowded courtroom.

"It's been a long, emotional 17 or 18 days and I let my emotions get the better of me," Fischer said later. "I promised my aunt (Michael Hargon's mother) that I wouldn't do that."'

Minutes before lawmen were to bring Hargon into the courtroom Monday, Strain announced a delay due to "profound new developments" in the county where the search is being conducted.

State troopers and deputies closed entrances to the land while helicopters and state Crime Lab trucks moved in to assist in the ground search. The property consists mostly of pine woods.

Intense searches of Hargon's home and 160 acres around it were carried out over the weekend by teams using horses, off-road vehicles, a helicopter and tracking dogs.

Families in the area said the land being searched was owned by Tony Moran, whose family lives about a mile from the property. Family members at the Moran home would not comment on the search. The Moran property is several miles way from Earnest Hargon's home near Taylorsville.