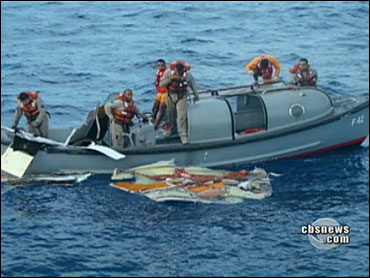 Divers off the coast of Brazil made an important discovery today in the flight 447 investigation - a large portion of the jet's tail. That could help them locate the black box flight recorders, which are also kept in the rear of the plane.

Sixteen bodies have been recovered as well. And they, too, could provide valuable clues into what happened, reports CBS News chief investigative correspondent Armen Keteyian.

For the families of flight 447, the recovery of bodies in the waters 400 miles off the northern coast of Brazil provides a step toward some kind of closure. But the bodies also have the potential to provide valuable clues as to what doomed the massive jet.

"They are important pieces to the puzzle," said Tom Corrigan, a chief investigator into the crash of TWA Flight 800, which exploded over the Atlantic shortly after leaving John F. Kennedy Airport in 1996. "They have to be examined thoroughly."

First medical examiners will attempt to identify every victim from DNA, photographs or dental records. Experts will then likely reconstruct the seating chart of the plane, pinpointing each passenger's location and searching for a pattern of injuries or cause of death.

Did, for example, the passengers in one section of the Airbus A-330 suffer burns, broken bones or concussions? Autopsies will reveal whether the victims died instantly, in the air, or drowned in the ocean, helping investigators determine whether the plane blew up, broke apart in the sky or on impact.

"Where they are located in the flight path? if they're in the rear of the flight path, they could be important because they can tell you where the aircraft broke up first," Corrigan said.

For example, in TWA 800, the absence of bomb residue on the victims helped rule out a terrorist act. Burn patterns revealed crucial evidence that the plane was brought down by an explosion in the center fuel tank.

In the end those who were lost, providing clues to help solve the mystery behind what really happened to Air France flight 447.