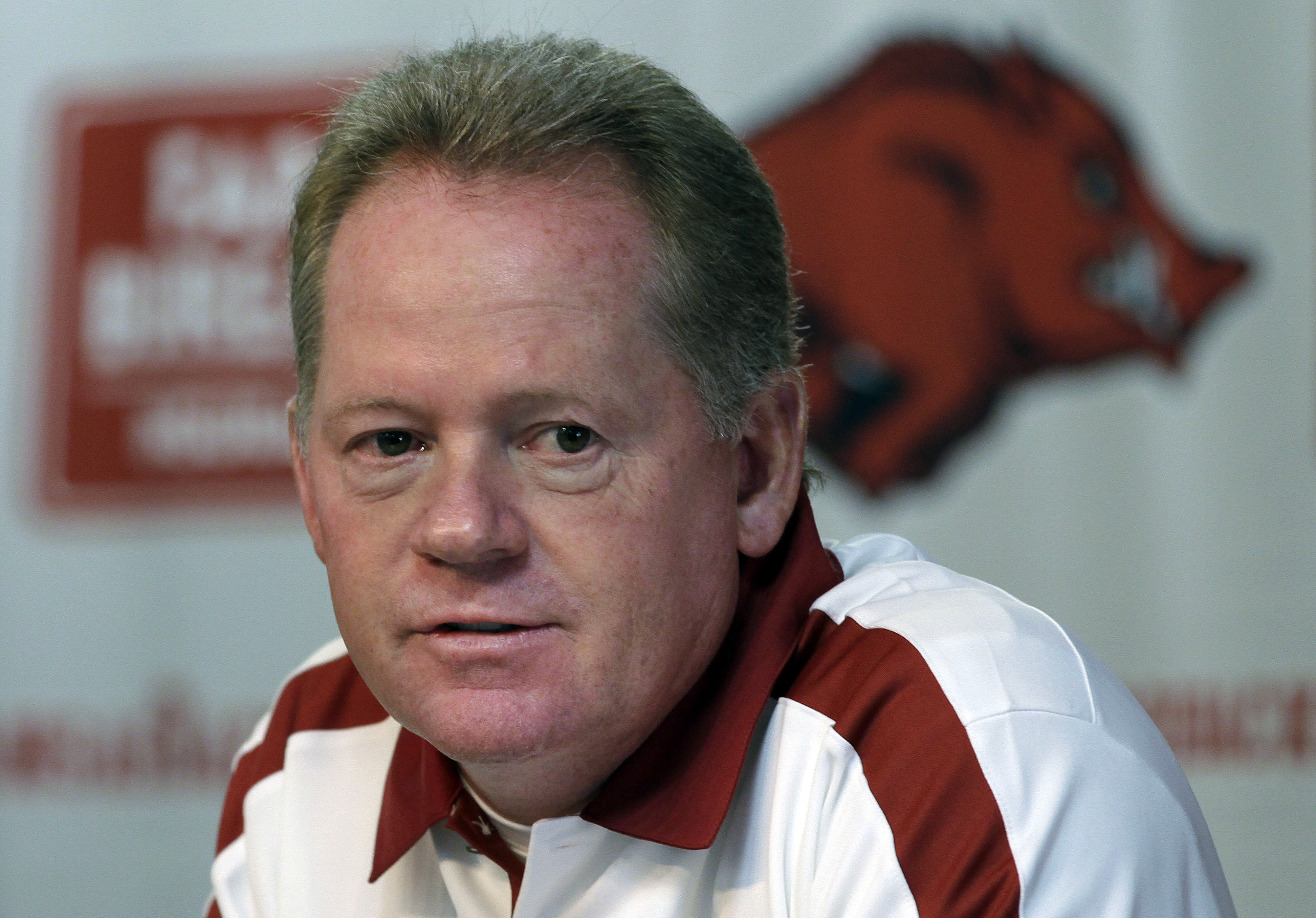 (AP) FAYETTEVILLE, Ark. - Bobby Petrino's relationship with his mistress dated back more than a year, with the former Arkansas coach sending her candy, calling her a "close friend" and suggesting the affair that cost him his job started with a kiss over lunch last fall, according to documents released Thursday.

Those details were in handwritten notes kept by athletic director Jeff Long during his investigation of Petrino, who was fired last week. Long's notes, along with those of assistant athletic director Jon Fagg, were released as part of a Freedom of Information Act request made by the Associated Press. The two interviewed Petrino, his mistress and others during the investigation that led to the coach's dismissal on April 10 — nine days after the motorcycle crash that exposed their relationship.

The notes suggest the 51-year-old Petrino and 25-year-old Jessica Dorrell were intimate for approximately five months, from September or October until this past February. According to the notes, however, the university discovered 326 phone calls and 7,228 text messages between the two that date back further, to April 2011. And they show Petrino and Dorrell claimed to have ended the intimate part of their relationship once it became clear she wanted to apply for a job under Petrino — one he wanted her to "earn." She was hired March 28 and has since resigned.

Long was clearly skeptical that the affair was truly over, asking in his notes: "If the relationship was over, why get on (the) bike?"

"Why would she say she expected the relationship to continue if the motorcrash didn't occur," Long also wrote down as one of his questions for the coach. No answer was listed for either in the notes.

In the end, Long was unable to overlook Petrino's repeated failures to disclose details of his affair, noting the following times in his notes:

. "You knew when I visited you in (the) hospital (the day following the accident)."

Long also made a point in his notes to remind Petrino that he hid the affair and a $20,000 Christmas gift before Dorrell was hired. Dorrell told Long she hid the money under her mattress, then deposited it shortly before buying a new car the week she began her job.

According to Long, Petrino said he and Dorrell became friends while she held her former job as a fundraiser for the Razorback Foundation. They began going to lunch together, and Petrino told his boss that his affair with Dorrell began with a kiss last fall.

At one point last October, Petrino and Dorrell were sitting in a car, eating lunch and talking and "she said are you going to kiss me," according to Long's notes of his April 10 conversation with Petrino. He then wrote: "Kissed on lunch outing."

It's unclear when the relationship turned sexual. Dorrell said the two had been intimate four to six times since around September, and the "last encounter" was around signing day on Feb. 1, when Petrino showed up via car service at a Little Rock event rather than arriving by plane. Fagg's notes indicate the two decided they should be only friends sometime in early February. Petrino told Long that Dorrell was interested in the job, that "she approached him. Thought she would be good. Understood they would definitely have to stop."

Petrino was fired for failing to disclose his relationship with Dorrell, a former Arkansas volleyball player whom he hired last month without disclosing his conflict of interest or the fact he had once given her the $20,000. The payment, Long wrote, could make the school "vulnerable to sexual harassment" lawsuit.

Petrino, Long wrote, "never thought the gift was a problem or the relationship." Long put two big question marks next to that entry.

Dorrell referred to "5-6 gifts" during her interview with Long, according to the notes, and Long said the money was used for the car, wedding expenses and a vacation. There are references to candy gifts — Hot Tamales, specifically, with Dorrell saying she "got it once before things started" and Long also talked with Josh Morgan, an athletic department employee who has been described as Dorrell's fiancDe "at one point."

"Football gave her a bonus to get a car," Morgan told Long, according to the notes. The purchase of the black Acura apparently came three days after she was hired. Dorrell quit her job Tuesday and received $14,000 in what the school described only as a settlement payment.

Long wrote a detailed list of contract violations Petrino had committed before meeting with the former coach to discuss them. He included in his notes that he was still looking for Petrino to remain the Arkansas coach, despite those violations, and asked Petrino to "help me understand why these are not violations of your contract."

However, Petrino's answers didn't provide Long with the ammunition he was looking for to keep the highly successful coach. Instead, Petrino confirmed his relationship with Dorrell had continued, saying they went on the fateful April 1 motorcycle outing because they "had always said they would go for a ride."