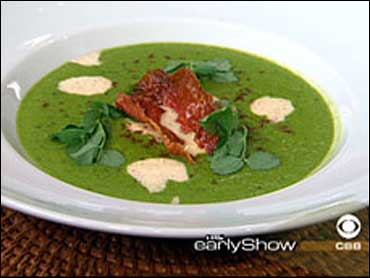 How do you know spring's really here? Just walk around the produce section of your local store. You'll find a bounty of fresh fruits and vegetables, all ready to eat.

Green peas are at their peak in March, April and May, and then again in August through November. Look for unblemished, plump, bright green pods when buying fresh peas.

Although green peas are often thought of as a vegetable, they're actually legumes and a great source of vitamins A and C, as well as niacin and iron.

Flay serves his pea soup with Serrano ham. One of the secrets to the richly robust flavors of Spanish cuisine is pork, specifically cured ham, or jamón.

This air-cured ham is used in traditional tapas when thinly sliced, and is an exceptional addition to stews and sautéed vegetables. Prosciutto may be substituted for Serrano ham.

The word "Serrano" in Spanish refers to the Sierra, or mountains. Jamón Serrano is traditionally produced in mountainous environments where the air is clean, the moisture levels just right, and the winters very cold. These are the traditional requirements for curing.

The fresh hams are first trimmed and cleaned, then stacked like cordwood and covered with salt. This serves to draw off excess moisture and to preserve the meat from spoiling.

That typically lasts two weeks. The salt is washed off and the ham is hung to dry, starting the first curing phase. Here, among other things, the fat begins to breakdown. This takes about six months.

Air drying comes next. It's during this phase that the hams are hung in a cool, dry place, and where the distinct, subtle flavors and aromas develop. This lasts from six to 18 months, depending on the climate, as well as the size and type of ham being cured. The drying sheds ("secaderos") are usually built at higher elevations, thus the name "Serrano."

1. Preheat oven to 425 degrees F. Place poblano chiles on a baking sheet, rub with oil and season with salt and pepper. Roast the chiles until slightly charred and cooked through, about 30 minutes. Remove, let cool slightly, remove skin and seeds and coarsely chop.
2. Place the poblanos in a food processor and process until smooth.

Whisk together all ingredients in a small bowl.

1. Heat oil in a large sauté pan over high heat until oil begins to shimmer.
2. Carefully add 2 slices of the ham at a time and cook until crispy on both sides.
3. Remove to a plate line with paper towels.

1. Combine stock and ham hock in medium saucepan, bring to a simmer and cook for 30 minutes. Remove the ham hock and add the peas, salt and cumin and cook until the peas are very soft, 15-20 minutes.

2. Using a slotted spoon, place the peas in a blender with 2 cups of the stock and blend until smooth. If the soup is too thick, add additional stock ¼ cup at a time. Transfer the soup to a clean saucepan over medium heat and whisk in the poblano puree and the crème fraiche and cook until heated through.

3. Ladle the soup into shallow bowls, drizzle with the cumin crème fraiche and top with 2 slices of the crisp Serrano ham; garnish with fresh cilantro or parsley leaves.