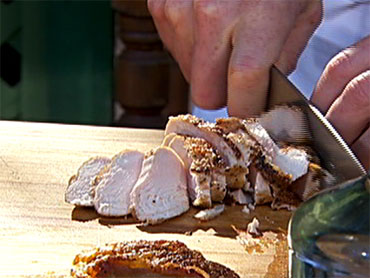 Cinco de Mayo is all about big fun and bold food. And nobody knows big and bold like "The Early Show"'s resident chef, Bobby Flay.

He appeared on the broadcast Wednesday with a flavorful, Mexican-inspired feast to help kick off the celebration.

The holiday of Cinco De Mayo, on May 5, commemorates the victory of the Mexican militia over the French army at The Battle of Puebla in 1862.

It is primarily a regional holiday celebrated in the Mexican state capital city of Puebla and throughout the state of Puebla, with some limited recognition in other parts of Mexico, and especially in U.S. cities with a significant Mexican population.

It is not, as many people think, Mexico's Independence Day, which is actually September 16th.

METHOD: Pickled Red Onions
1. Combine lime juice, vinegar, sugar, salt and chile in a medium saucepan, bring to a boil and cook until the sugar is dissolved. Remove from heat and let cool 5 minutes.
2. Put the onion slices in a small bowl. Pour the warm vinegar mixture over and toss to coat. Cover and refrigerate for at least 2 hours and up to 48 hours, stirring the mixture a few times.

METHOD: Mole
1. Put the almonds in a medium saucepan over medium heat and cook until lightly golden brown, stirring occasionally, about 5 minutes. Remove the almonds to a plate. Increase the heat to high, add the oil to the saucepan and heat until it begins to shimmer. Add the onions and cook until soft, about 4 minutes. Add the garlic and cook for 30 seconds. Stir in the tomatoes, chicken stock, chipotle and chile powders, bring to a boil and cook for 10 minutes.
2. Add the mango, raisins, tortillas and almonds and cook, stirring occasionally, until mangoes are soft and mixture is reduced by half, about 25 minutes.
2. Carefully transfer the mixture to a blender and blend until smooth. Return the mixture to the pan over high heat, add the honey, maple syrup, molasses and chocolate and cook until reduced to a sauce consistency, about 10 minutes; season with salt and pepper. Keep warm

METHOD: Habanero-Cilantro Butter
Stir together the butter, habanero, cilantro and honey until combined, season with salt and pepper.

METHOD: Hacked Chicken
1. Preheat oven to 350 degrees F. Heat oil in a large sauté pan over high heat. Season the chicken on both sides with salt and pepper. Sear, in batches if pan isn't large enough, until golden brown on both sides, about 4 minutes per side. Transfer the legs and thighs to a large roasting pan, skin side up and brush with some of the butter. (the breasts which cook more quickly will be added 10 minutes later)
2. Whisk together the chicken stock and ancho powder in a bowl and pour around the chicken in the roasting pan. Cook the thighs and legs for 10 minutes. Add the breasts to the pan, brush the skin-side with some of the butter and cook another 12 to 15 minutes or until the breast meat is cooked through and the thigh and legs are fork tender.

METHOD:
Place tequila, orange liqueur, lime juice and ice in a cocktail shaker and shake for 10 seconds..Rub the rim of a rocks glass with the lime wedge and dip in salt.. Strain the mixture into the glass and garnish with the lime wedge.

For a Tomatillo-Green Onion Guacamole recipe, go to Page 2.

METHOD:
Combine avocado, red onion, chile and lime juice in a medium bowl and coarsely mash with a fork. Fold in the tomatillos, green onions, cilantro and season with salt and pepper.