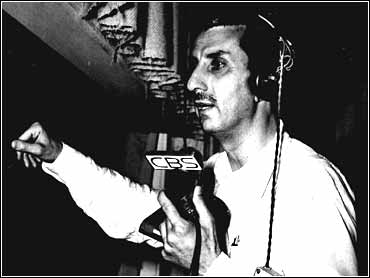 Our paths first crossed about twenty years ago when I was assigned to work with him on a television program that, for obvious reasons, was near and dear to his heart. He was then in the sunset years of what had been a long and distinguished career, and the prime-time special we were producing was to be called Fifty Years of Broadcasting with Robert Trout.

One of the first things I noticed about him was his formal and high-tone sartorial look. In a profession notorious for its raffish types who slouched around in rumpled coats and trousers, Trout generally wore dark, impeccably-tailored three-piece suits.

Also, in venturing outdoors, he almost always wore a hat, and I'll never forget the sight of him tipping it whenever he encountered a woman friend or colleague on the street or in a hotel lobby. To most of us who witnessed it, such an elaborately courteous gesture seemed a gracious holdover from a distant past when gentlemen inhaled snuff while they sipped brandy at their private clubs and addressed even their best friends as "sir."

Trout, of course, did not go back that far — to the Victorian Age — but having been born in 1909, he was old enough to have been influenced by the mores and manners of that decorous era.

His voice first came to the attention of a nationwide audience in the early 1930s when, as a young announcer at the CBS station in Washington, he was the man who introduced President Franklin D. Roosevelt's radio talks.

Trout was, in fact, the first to refer to those informal speeches as "fireside chats," and FDR was so delighted by the phrase that he adopted it as his own favorite description of the radio remarks he directed to listeners in living rooms across the country.
And from there Trout went on to become an early giant in broadcast journalism. Through the late thirties and forties, as radio news steadily grew in power and prestige, Trout was as big in his way as his legendary colleague — Edward R. Murrow — was in his.

He was especially adept at reporting live events where his flair for ad libbing would come into full play. Starting in 1936 and for many decades thereafter, Trout anchored the CBS News radio coverage of the political conventions, and it was on those occasions that his gift for off-the-cuff commentary and skill at creating vivid word pictures was put to its most effective use.

Although he never became as big a star on television as he was on radio, Trout did have one shining moment on the visual medium in 1964 when he was called on to co-anchor (with Roger Mudd) the CBS News television coverage of that summer's Democratic Convention.

At the time, CBS management had decided to experiment with alternatives to Walter Cronkite, who had been ensconced as the network's TV anchorman at conventions since 1952.

The Trout-Mudd team did a solid job that went over well with the critics, but in the weeks that followed the CBS brass decided to abandon the experiment, and on Election Night that year Cronkite was back in his customary anchor chair.

The following year, Trout decided to leave New York and move to Europe. And there – from his home base in Madrid – he roamed across the Continent, covering offbeat stories of one kind or another. But he periodically returned to the States, and always during the summer of presidential election years when he would be called on to play a leading role in the radio coverage of the conventions.

By the time I hooked up with him in 1981, Bob Trout was in his early seventies, but still going strong in his quiet, low-key way. I'm sorry to say that the 50-year personal history project we were trying to put together never progressed beyond the development stage — and more is the pity for that.

But in working together, we became friends, and along with his elegance and courtly manner, I was charmed by his dry sense of humor.

One time, during a visit to Washington to gather material for the TV program, we stayed at a hotel that happened to be the headquarters for a convention of the Daughters of the American Revolution.

While we were waiting to check in, Bob leaned over to me and whispered in a wary tone: "I don't mean to alarm you, but this hotel is filled with revolutionaries. We must be on guard at all times."

Then, directing my gaze to a nearby sofa and chair, upon which were seated three well-dressed dowagers with large bosoms and stern expressions, he said, "Now there's a rum-looking trio. Just the sort who would drop water bags on our heads. I suggest we avoid the front entrance and use only the side exits."

And from other friends of his I've heard many marvelous Trout stories over the years. What follows is a particular favorite.

Miami Beach was chosen as the site for both political conventions in 1972 and, in a shared lapse of sanity, both the Democrats and the Republicans chose to convene there in August. At that time of year, Miami Beach is a sweltering swamp, a hellish place where the oppressive heat is exceeded only by the humidity.

One day Trout decided to go out to lunch with a group of much younger colleagues, who had fallen into the habit of dining at a small Cuban restaurant near the Convention Hall. It was a modest eatery with no air conditioning — oly a small and hopelessly ineffective fan.

All of Bob's companions were dressed in shorts or similar light summer wear, and all of them were men except for a producer named Janet Roach. As for Trout, he was, of course, clad in his usual formal attire of dark, conservative three-piece suit with his tie firmly knotted.

As the group sweated through lunch in that Cuban furnace, Roach and the others marveled at Trout's composure and forbearance. Even in their light clothing, they were uncomfortably hot, and so they assumed poor Bob had to be suffering miserably in his three-piece suit.

Finally, after fifteen minutes or so, Trout made one small concession to the stifling heat. But before doing so, he turned to Roach (who was, after all, the only woman at the table) and politely inquired: "Janet, would you mind terribly if I unbuttoned my vest?"

Now that, I suggest, is the Old School at its best, and I sincerely doubt that we will ever see its like again.