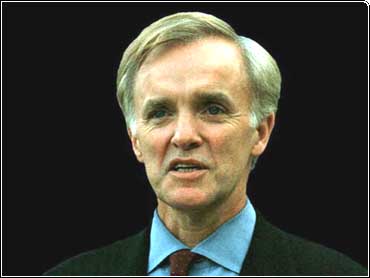 Sen. Bob Kerrey said Thursday he will leave the Senate at end of his second term.

The prominent Democrat and former presidential candidate said it is time to return to a private life. He made his announcement at news conference Thursday with his two children standing by his side.

"It's a deeply personal decision but I feel my spiritual side needs to be filled back up," Kerrey said.

Kerrey, 56, first hinted at the possibility he would not run again when he confirmed two weeks ago that he was a candidate for the presidency of the New School University in New York City.

The possibility of taking such a position prompted him to rethink his future plans, Kerrey said Thursday.

His ties in New York go beyond a mere job prospect. That is also the home of his girlfriend Sara Paley, a former writer for Saturday Night Live.

Kerry also said he would entertain the possiblity of seeking the vice presidency on a ticket with any of the Democratic presidential hopefuls.

In a statement from the White House, President Clinton called Kerrey's departure a "bittersweet one for his family, his colleagues in the United States Senate
and his constituents in Nebraska."

Mr. Clinton said, "Our government and nation are better because of Bob Kerrey's public service."

Kerrey's decision could hurt Democrats' chances of making any gains in the Senate, which currently has a 55-45 Republican majority. Kerrey's seat is considered a safe one in a state that traditionally votes Republican.

Kerrey, a millionaire, war hero and former governor, won election in the U.S. Senate in 1988 by defeating appointed incumbent Sen. David Karnes. He was re-elected in 1994.

In the Senate, Kerrey has established himself as an expert on agriculture, an advocate for major health care reforms and a liberal voice on defense matters, including voting against going to war in the Persian Gulf.

Kerrey ran for president in 1992. He withdrew after failing to win much support in any primary except South Dakota. In December 1998, he announced that he was not going to seek the Democratic nomination for president in 2000.

Kerrey served in Vietnam as a member of the elite Navy SEALS and earned the Congressional Medal of Honor, America's highest military honor, for directing an attack on a Viet Cong guerrilla group even after a grenade exploded at his feet. He lost part of his right leg.

He entered the private sector in 1972 after returning from the war, building a successful chain of restaurants and health clubs.

He was a political unknown when he unseated Republican Gov. Charles Thone in 1982 in his first bid for office. He made headlines nationwide for his relationship with actress Debra Winger, whom he met while she was in Nebraska making the movie Terms of Endearment.>

Despite high approval ratings, Kerrey dropped out of politics after one term as governor to teach a college course in California on the Vietnam War's effect on American society. He then returned to politics when he made his bid for the Senate.

The possibility of Kerrey's departure has prompted a number of names to be pushed into the political pool, from former Democratic Gov. Ben Nelson to former Nebraska football coach Tom Osborne, who is a Republican.

One certain candidate will be Nebraska Attorney General Don Stenberg, a Republican who will officially announce today that he is running for the Senate. Another Republican, physician Elliott Rustad, also is seeking the seat.