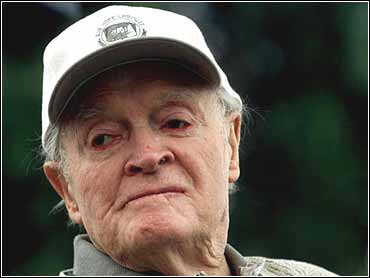 Bob Hope was released from a hospital Thursday after a 12-day stay to treat what doctors said was a mild case of pneumonia.

The 98-year-old entertainer left Providence St. Joseph Medical Center in Burbank with his wife for their home near Los Angeles.

"However, it will be several more weeks before he is fully recovered from his illness," he said.

Grant said that when the comedian was asked what he wanted for dessert for his first lunch back home, Hope answered, "I don't care ... as long as it's coffee ice cream."

Hope entered the hospital Aug. 26 after he had trouble breathing and was later diagnosed with mild pneumonia. He received antibiotics, intravenous fluids and respiratory therapy.

He had been expected to be released by Monday, but was kept at the hospital with a slight fever.

Hope's illness, coming little more than a year after he was hospitalized for gastrointestinal bleeding, was another sign that age is catching up with the entertainer five years after he went into semi-retirement.

The English-born Hope, famed for his one-liners and overseas shows for U.S. troops, entertained generations of fans in a career spanning seven decades and every medium - from vaudeville and radio to live theater, films and television.