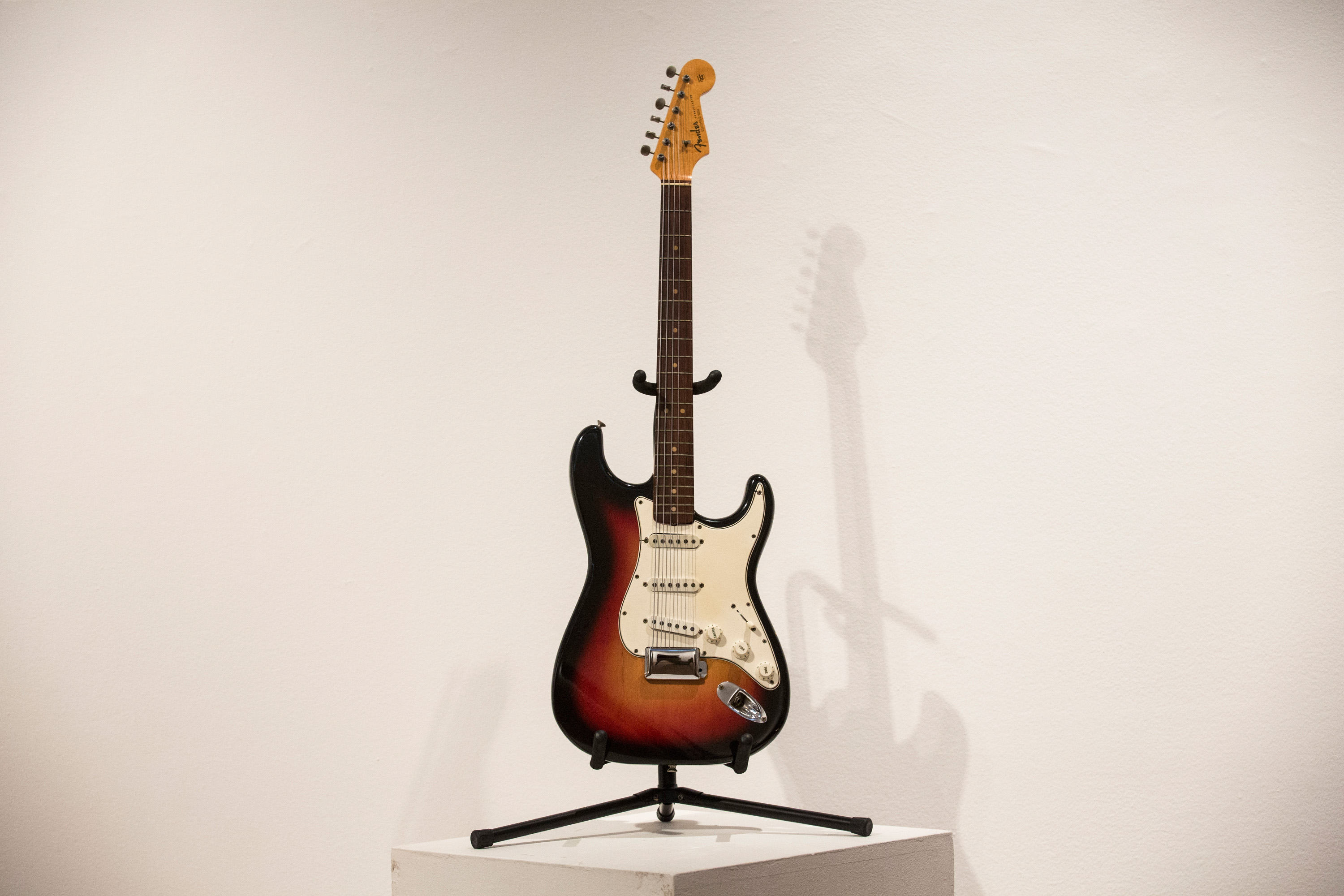 NEW YORK -- The Fender Stratocaster that Bob Dylan plugged in when he famously went electric at the 1965 Newport Folk Festival sold Friday for nearly $1 million - the highest price ever paid for a guitar at auction.

A buyer identified only as a private individual agreed to pay $965,000, including the auction house's fees, for the sunburst-finish guitar, Christie's said.

Dylan's legendary performance at the festival in Rhode Island 48 years ago marked his rupture with the folk movement's old guard and solidified his shift away from acoustic music, like "Blowin' in the Wind," toward amplified rock, such as "Like a Rolling Stone."

The raucous, three-song electric set was booed by some in the crowd, and folk purists saw Dylan as a traitor and a sellout.

Christie's had expected the guitar, which was sold with its original black leather strap and Fender hard-shell case, to go for far less: $300,000 to $500,000.

The previous record for a guitar sold at auction was held by Eric Clapton's Fender, nicknamed "Blackie," which sold at Christie's for $959,500 in 2004.

Dylan's guitar had been in the possession of a New Jersey family for nearly 50 years after the singer left it on a private plane.

The pilot's daughter, Dawn Peterson of Morris County, N.J., said that her father asked Dylan's management what to do with the instrument, and nobody ever got back to him.

Last year, she took it to the PBS show "History Detectives" to have it authenticated, and rock-memorabilia experts matched its wood grain to close-up color photos of Dylan's instrument at the 1965 festival.

Dylan's attorney and his publicist didn't respond to email and phone requests for comment. Dylan and Peterson, who declined to be interviewed, recently settled a legal dispute over the items. The terms weren't disclosed.

Dylan's Newport performance - like Elvis Presley's above-the-hips appearance on "The Ed Sullivan Show," or the Beatles' arrival in America, or Woodstock - is regarded as one of the milestone moments in rock history.

Exactly what happened at the festival on July 25, 1965, has become enshrouded in legend, and to this day, the debate persists over whether those who booed were angry over Dylan's electric turn or were upset over the sound quality or the brief set.

Backed by a band that included Mike Bloomfield on guitar and Al Kooper on organ, Dylan played such songs as "Maggie's Farm" and "Like a Rolling Stone." He returned for an acoustic encore with "It's All Over Now, Baby Blue."

Legend has it that Pete Seeger, one of the elder statesmen of the folk movement, was so angry that he tried to pull the plug on the electric performance or threatened to cut the cable with an ax.

But years later, Seeger said he had nothing against Dylan going electric - he was upset over the distortion-filled sound system.

Christie's also was offering five lots of hand- and typewritten lyric fragments found inside the guitar case - early versions of some of Dylan's songs. They had a presale estimate ranging from $3,000 to $30,000. But only one of them sold; it went for $20,000 and contained draft lyrics for "I Wanna Be Your Lover."