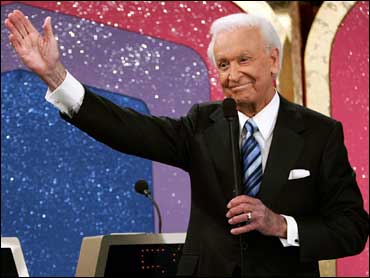 Bob Barker's final episode as host of "The Price Is Right" aired on Friday.

The silver-haired host ended his record tenure by blowing kisses and working in the same low-key, genial fashion that made him one of daytime TV's biggest stars.

"Now folks, I want to thank you very, very much for inviting me into your homes for the last 50 years. I am deeply grateful," Barker said after a winner of the showcase showdown was announced.

He closed the show with his usual, "And please remember, help control the pet population. Have your pets spayed or neutered. Goodbye everybody."

Much like any other day, there was a standing ovation as the veteran game show host kicked off the show and the announcer uttered the trademark phrase, "Come on down!"

Later, Plinko was played, including the Range Game and, of course, the showcase showdown.

At one point Barker shook the hand of one contestant who had waited in line five days for Barker's final taping.

Barker taped his last episode — his 6,586th — of the popular CBS game show June 6, retiring after five decades on national television. The episode is scheduled to air again Friday evening before the 34th Annual Daytime Emmy Awards at 9 p.m. ET.

On Thursday Barker received a bitter sweet farewell gift when his show won his 18th trophy at the Creative Daytime Emmys presented in L.A.

Reruns of Barker-hosted shows will play throughout the summer.

A new host has yet to be named. Among those reportedly in the running are Todd Newton of the E! network, Mark Steines of "Entertainment Tonight," George Hamilton, Rosie O'Donnell and "Dancing With The Stars" alum John O'Hurley.

Meanwhile, the long and skinny mic that the retiring game-show host used from 1992 to 2002 is being auctioned on eBay. The proceeds will go to an animal rights charity. But the price is like a horse pill, above $19,000 at last look.

Marc Green is in charge of the auction. He runs a "Price is Right" fan site called golden-road.net, and explains the show's producers thought the item might bring in a thousand dollars.

Green says the microphone that heard from hundreds of Plinko players was custom-made from salvaged parts by CBS engineers. Barker's original Sony ECM51 died in the early '90s.

The auction ends tomorrow night, right after the repeat of Barker's final broadcast.