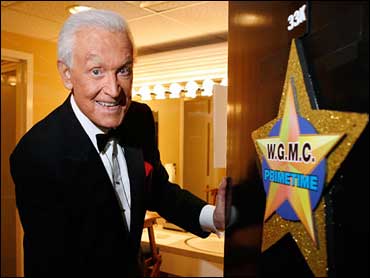 Bob Barker maintained a smile on his face throughout the final show as he bid goodbye after 35 years as host of "The Price Is Right" and 50 years of daytime TV. But he got misty-eyed afterward while speaking to reporters.

"The thing that surprises me most is that I got through the whole (show) without crying," the icon said, still holding his trademark microphone with the old-fashioned cord.

During the post-show press conference, Barker said he spent the morning of his last day on the job reminiscing about his five decades on national TV.

"I really had myself worked up into an emotional state," he said. "And I thought, `I've really got to get over there and do this show. Straighten yourself out, Barker."'

That he did, ending his record tenure by blowing kisses and working in the same low-key, genial fashion that made him one of daytime TV's biggest stars. As the off-air light loomed, he closed with his usual, "Help control the pet population, have your pets spayed or neutered. Goodbye everybody."

After the cameras stopped rolling he told the studio audience, "I thank you, thank you, thank you for inviting me into your home for more than 50 years. I'm truly grateful and I hope that all of you have enjoyed your visit to `The Price Is Right."'

Barker was humble when asked what qualities have made him an American favorite for half a century.

He said the key to his success is listening.

"When I talk with someone, I listen. And I think if you do, you're going to find little nuggets of gold to go with."

To see photos of highlights of Barker's career, click here.

The show's hour-long taping began with its host entering the studio to a standing ovation from an adoring public and a giant shower of colorful confetti from his colleagues. The program is scheduled to air on June 15.

The warm reception was "humbling," Barker said: "This whole experience has just been overwhelming."

Fans felt it too.

"This is over-the-top amazing. It's like a piece of Americana," said Terry Baldwin, 55, of Pebble Beach, Calif., who had camped out overnight to ensure she got a seat in the audience. "You could feel the electricity all day long."

Barker answered questions from the audience during commercial breaks in the taping. "Someone asked, will I spend my mornings watching 'The Price Is Right'? In as few words as possible, no," he quipped. He quickly conceded, however, that curiosity might get the better of him.

Barker said the only souvenir he planned to take with him was the sign from his dressing room door. "The guys put up a sign that (says) WGMC, world's greatest master of ceremonies."

Barker began his national television career in 1956 as the host of "Truth or Consequences." He first appeared on CBS' "The Price Is Right" on Sept. 4, 1972, and has been the face of the show ever since.

For 35 years, he has played the same games with contestants and filmed from the same spot — Studio 33, aka the Bob Barker Studio — at CBS Television City.

"The only thing that's changed on 'he Price Is Right' is the color of my hair," Barker said during a CBS prime-time tribute show that aired last month.

"Because he's a vegetarian, we respect his wishes and we don't advertise meat products on the show," he said. At Barker's request, they also stopped giving away fur coats.

The silver-haired host's long reign has also inspired fan traditions. Most female contestants — and even some men — kiss him on the cheek. Members of the military wear their uniforms. College students wear their university sweat shirts and groups of fans come in matching custom-made T-shirts.

As the legendary host counted down his last days on the air, fans from around the country made pilgrimages to Los Angeles to see him. Dozens camped out overnight near CBS studios for a chance to say goodbye during Barker's final week of shows.

"He's part of American culture," said Mark Dub, a NASA engineer who flew from Houston to attend the last show.

Barker's long tenure was checkered by lawsuits brought by past "Barker's Beauties," the gown-wearing hostesses who present prizes such as microwaves, pinball machines and brand-new cars. Some sued him for sexual harassment and wrongful termination over the years. Most received out-of-court financial settlements.

Barker said he has no regrets — yet — about retiring: "Isn't that strange? I expected to have second thoughts."

He plans to fill his free time with travel, exercise and working with his animal charity, the DJ&T Foundation, named for his late wife, Dorothy Jo, and mother, Matilda ("Everybody called her Tilly," he said).

Though Barker joked that "all of television is going to end" when he retires, "The Price Is Right" will continue in the fall with a new host, who has yet to be named. Among those reportedly in the running are Todd Newton of the E! network, Mark Steines of "Entertainment Tonight," George Hamilton and John O'Hurley.

"You're never going to be able to find somebody who's just like Bob Barker," said Cecile Frot-Coutaz, chief executive of FremantleMedia North America, which produces "The Price Is Right." "They're very large shoes to fill."