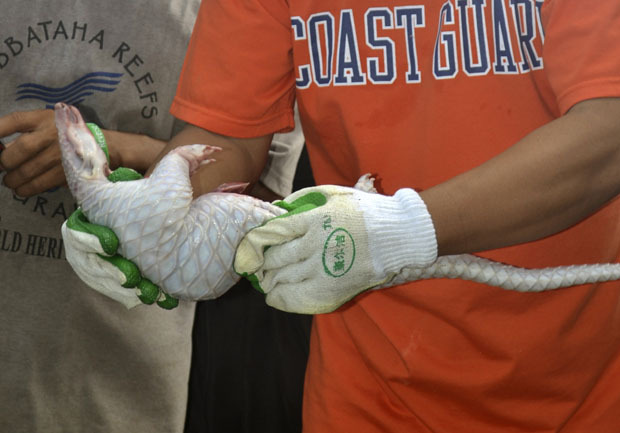 MANILA, Philippines A Chinese vessel that ran into a protected coral reef in the southwestern Philippines held evidence of even more environmental destruction inside: more than 22,000 pounds of meat from a protected species, the pangolin or scaly anteater.

The steel-hulled vessel hit an atoll on April 8 at the Tubbataha National Marine Park, a UNESCO-designated World Heritage Site on Palawan island. Coast guard spokesman Lt. Cmdr. Armand Balilo said Monday that 400 boxes, each containing 25 to 30 kilograms of frozen pangolins, were discovered during a second inspection of the boat Saturday.

The World Wide Fund for Nature Philippines said the Chinese vessel F/N Min Long Yu could have been carrying up to 2,000 of the toothless, insect-eating animals rolled up in the boxes, with their scales already removed.

"It is bad enough that the Chinese have illegally entered our seas, navigated without boat papers and crashed recklessly into a national marine park and World Heritage Site," said WWF-Philippines chief executive officer Jose Ma. Lorenzo Tan. "It is simply deplorable that they appear to be posing as fishermen to trade in illegal wildlife."

The boat's 12 Chinese crewmen are being detained on charges of poaching and attempted bribery, said Adelina Villena, the marine park's lawyer. She said more charges are being prepared against them, including damaging the corals and violating the country's wildlife law for being found in possession of the pangolin meat.

It is not yet clear which of the four Asian pangolin species the meat comes from. The International Union of Conservation of Nature lists two species as endangered: the Sunda, or Malayan, pangolin, and the Chinese pangolin. Two others, including the Philippine pangolin endemic to Palawan, are classified as near threatened.

The animals are protected in many Asian nations, and an international ban on their trade has been in effect since 2002, but illicit trade continues. The meat and scales of the pangolin fetch hundreds of dollars per kilogram in China, where many believe they cure various ailments.

The IUCN says rising demand for pangolins and lax laws are wiping out the toothless anteaters from their forest habitat in Southeast Asia.

Alex Marcaida, an officer of the government's Palawan Council for Sustainable Development, Philippine authorities consider the Philippine pangolin threatened because of unabated illicit trade. He said the Chinese crewmen have said the pangolins came from Indonesia, but officials were still verifying the claim.

WWF-Philippines said the global illegal wildlife trade is estimated to yield at least $19 billion per year, comprising the fourth-largest illegal global trade after narcotics, product and currency counterfeiting and human trafficking. It said the risks are low compared with other crimes, and that high-level traders are rarely arrested, prosecuted or convicted.

The Philippine military quoted the fishermen as saying they accidentally wandered into Philippine waters from Malaysia. They were being detained in southwestern Puerto Princesa city, where Chinese consular officials visited them.

Tubbataha is a 97,000-hectare (239,700-acre) marine sanctuary and popular diving destination 640 kilometers (400 miles) southwest of Manila. The massive reef already had been damaged by a U.S. Navy ship that got stuck in January and had to be dismantled.

The fishermen face up to 12 years' imprisonment and fines of up to $300,000 for the poaching charge alone. For possession of the pangolin meat, they can be imprisoned up to six years and fined, Villena said.