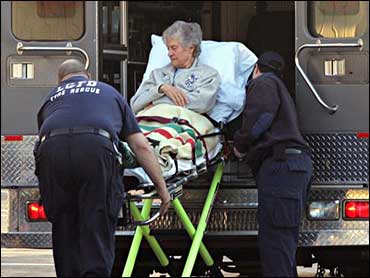 A tour boat that capsized on a New York lake, killing 20 people, did not have the required number of crew members aboard, and state regulators suspended licenses for all five vessels belonging to the company that operated the tour, officials said Monday.

The Ethan Allen, which flipped over Sunday in Lake George while carrying 47 elderly tourists, was required by state boating regulations to have two crew members, said Wendy Gibson, spokeswoman for the state Office of Parks, Recreation and Historic preservation. Any commercial boat that carries between 21-48 passengers must have two crew she said.

Authorities have said the only crew member aboard was the captain.

In searching for clues and details surrounding the tragedy, authorities said the boat's 47 passengers were sitting on long benches and slid sharply to one side of the vessel just before it flipped over.

Wayne Bennett, State Police superintendent, said that investigators do not know what initially caused the Ethan Allen to tip. But he said passengers either slid or were thrown to one side of the boat after it began lurching.

"And that, of course, would automatically mean an even bigger shift of weight," Bennett said.

Earlier in the day, Bennett said the seats were not secured to deck. But later, State Police said that was incorrect.

On Monday afternoon, crews using inflatable bags raised the sunken vessel 70 feet to the surface. They planned to pump it out and tow it to shore. NTSB investigators will then examine the wreck.

The captain of the boat told authorities it was hit by waves from at least one other vessel and turned over as he tried to steer out of them, authorities said earlier Monday. CBS News' Michael Weber reports there are eyewitness rumors that the wake of a larger tour boat caused the boat to capsize, but there was no immediate confirmation that another boat that could have kicked up waves was in the area.

The boat flipped so fast that none of the 47 passengers could put on a life jacket. People thrashed in the water, clung to the overturned boat and screamed "I can't swim!"

Passengers spilled into the murky water as the boat overturned. One woman trapped beneath the boat said she survived only after seeing daylight and swimming toward it. Eight people were hospitalized.

All of the passengers were Michigan residents on an East Coast leaf-peeping tour that included a one-hour boat ride around the south end of Lake George — just in time to see the first flashes of fall color in the surrounding Adirondack mountains.

"I never thought I was going to lose friends and not be able to say goodbye to them," Jeane Siler, a 76-year-old survivor, said Monday.

As the boat began its slow slide to the bottom, pleasure boaters out enjoying the late spurt of summer weather formed a makeshift rescue armada. Gisella Root and her husband, who own a local motel, rushed to the scene after they saw the boat bobbing upside down in the water from their dock.

As her husband dove in clothed, Root threw life preservers and seat cushions to the survivors and pulled them into the boat one by one. Making the rescue harder was a blooming diesel fuel slick from the overturned boat that made survivors slippery to the grip.

"I'm assuring them `You're OK, I'm not going to let go of you' Everybody was just drenched with fuel, so they were slick," Root said.

The dead, brought in on a separate dock, were wrapped in white sheets and laid out on the green lawn nearby the survivors.

"One after another, they started bringing them in," said retired businessman John Doody.

Kelly said the captain, Richard Paris, refused to get off the rescue boat when he was ferried in, insisting: "No, I'm the captain. I'm going back out."

They let him go.

Investigators had not tested Paris, who is an experienced boat captain, for drug or alcohol use because there was no evidence of intoxication, the sheriff said. He said there didn't appear to be any criminal conduct. No one answered a phone call to Paris' home Monday.

Virgil Chambers, executive director of the National Safe Boating Council, an organization for recreational boaters, said he was not familiar with the specifics of the Ethan Allen but said investigators would probably examine how weight was distributed within the boat.

"If all the people were on one side, maybe to look at something, and if the operator were to take the boat over a wave at a particular angle, it could cause the boat to roll," Chambers said.

Chambers said he also expected investigators to look into whether there were any modifications to the covered, glass-enclosed craft, such as the addition of a canopy structure, that might have made the boat less stable.

New York state boating regulations require a life jacket for every person on a boat, but people do not have to wear them.