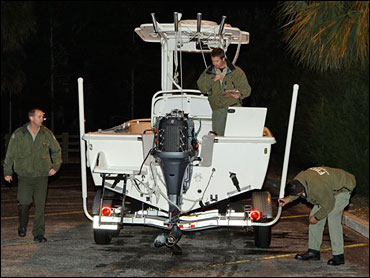 The father of an NFL player who has been missing nearly a week in the Gulf of Mexico after a boating accident disputes an account of the lone survivor, who said the football player gave up, discarded his life vest and floated away.

Family and friends refused to end the search for two NFL players and a third man missing four days in the Gulf of Mexico, enlisting private boats and planes to comb the waters off the Florida coast.

The only known survivor, Nick Schuyler, was rescued Monday.

Cooper's father, Bruce, rejected Schuyler's version of events, saying his son was not the type to give up.

"I raised the kid. I lived with the kid. That's not his character," Bruce Cooper told The St. Petersburg Times.
"In my heart of hearts," the father said, "I just really believe that he's out there somewhere, just waiting to be found."
Hypothermia could have made Cooper and Smith irrational enough to remove their life vests or Schuyler confused about what he saw, reports CBS News correspondent Kelly Cobiella.

Authorities were done, but about a dozen charter boats motored out Wednesday, some with friends of the families aboard, to try to locate some signs of the men, according to dock workers at John's Pass near St. Petersburg. Three private planes also flew over the endless stretch of water, according to Cooper's father.

"Everyone around here, they've either known someone or heard of someone who's been lost out at sea," said David Scott, who works at a marina at John's Pass. "It's just one of those situations. Everyone really comes together in times like these."

Schuyler, the fourth man on the fishing trip and Bleakley's former South Florida teammate, was rescued after a Coast Guard cutter crew found him clinging to the hull 35 miles off Clearwater. His doctor said it's a "miracle" Schuyler survived in the 63-degree Gulf water for nearly two days.

Dr. Mark Rumbak said the 24-year-old was in good condition but will remain in intensive care in case there are complications. Schuyler probably could have lived only another five to 10 hours, Rumbak said.

"I think he is extremely fortunate," Rumbak said. "I can't explain it. Some divine providence, I really think."

Authorities located 26-year-old Cooper's 21-foot boat, which had drifted 50 miles west of Sarasota, said Jim Manson, an investigator with the Florida Fish and Wildlife Conservation Commission. It took two private boats three tries to right the vessel and it appears to be in good shape, Manson said. Inside were 5-gallon gas cans, a life jacket, water bottles and some bagged sandwiches.

The boat was pulled ashore about 8:30 p.m. at a boat ramp in St. Petersburg. There was little visible damage, although an engine cover appeared to be missing, exposing wiring and parts.

The men left Clearwater Pass in calm weather, but heavy winds picked up through the day and the seas got heavy, with waves of 7 feet and higher, peaking at 15 feet. A relative alerted the Coast Guard early Sunday after the men did not return as expected.

The missing men's families have set up an e-mail address for experienced pilots and boaters to contact them to help. Coast Guard Capt. Timothy Close said the agency wouldn't prevent private searches, but discouraged them, saying they could be dangerous. He said authorities believed if there were more survivors, they would have been found.

Free-agent defensive tackle Tank Johnson, a childhood friend and college teammate of Cooper at Washington, was taking a lead role in the renewed search. Johnson, who played for the Dallas Cowboys last season, said the family has not given up hope that the men are still alive.

"I truly believe he is out there somewhere being strong," Johnson said.

Even if the men aren't found alive, it's important to recover their remains so families can have closure, Johnson said.

"This kid is going fight to the bitter end," said Cooper's father, Bruce Cooper. "And so in my heart of hearts, I just believe he's out there somewhere just waiting to be found."

Schuyler told Bleakley's mother the harrowing account of the friends' fight for survival, describing how they swam back to the boat despite repeatedly being slammed by waves. Bleakley and Schuyler managed to stick together for about 24 hours and they talked about how they would live their lives differently, Betty Bleakley said.

"He said they huddled together, they just kept climbing back on the boat after getting knocked off," she said. "They fought. They fought."

She said her 25-year-old son's actions were heroic, including swimming underneath the boat to get life vests for the other men and then using a cushion for floatation himself.

"That was Will," she said. "Will was calm and levelheaded and would just try to think things through. As painful as it was talking to Nick, it's providing some closure for us."