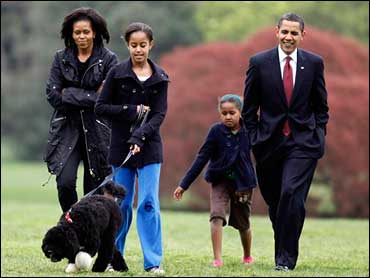 President Barack Obama raked in millions of dollars in book royalties in 2009 and got one very special $1,600 gift -- his pet dog, Bo.

The Portuguese water dog, which was a gift from the late Sen. Ted Kennedy, was listed on annual financial disclosure forms the White House released Monday.

Obama also claimed an inheritance worth $1,000 or less from his grandmother, who died in the final days of his presidential campaign.

Royalties from his books, "Dreams From My Father" and "Audacity of Hope," rang in at between $1 million and $5 million each.

Obama also listed a number of safe investments in Treasury bonds and retirement and college savings accounts. Including funds held jointly with his wife, Michelle, those assets were worth between about $2.2 million and $7.5 million in 2009. Assets are listed in wide ranges on the disclosure forms, making it difficult to determine their value with precision.

There was also $1.4 million from winning the Nobel Peace Prize, which the president donated to charity.

Meanwhile, Vice President Joe Biden did not accept many gifts last year, but one involved highbrow literature, according to his financial disclosure report.

Biden received a first-edition copy of "Anna Livia Plurabelle" signed by the author, James Joyce, and valued at $3,500. The story is a chapter from the Irish writer's famously complex novel, "Finnegan's Wake."

The giver was Margaret Spanel, a donor to Democratic candidates.