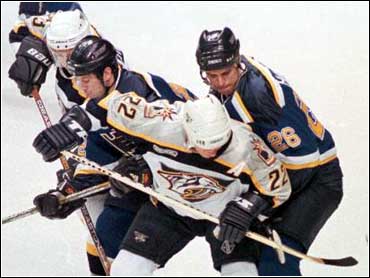 St. Louis rookie Jochen Hecht made an impressive return to the Blues lineup.

Hecht, who had missed 13 games with a sprained ankle, scored the winning goal and added an assist as the Blues beat the Nashville Predators 2-1 and set a team record with their seventh straight road win Friday night.

Blues goalie Roman Turek, who made 16 saves for his 30th win, stopped Drake Berehowsky on a slap shot with 5.6 seconds left as the Predators lost their sixth straight.

"We've got to keep the faith, keep believing in one another, and keep marching on," Predators captain Tom Fitzgerald said. "We've got to maybe be concerned about the Nashville Predators, what we do, and then things will take care of themselves."

"We're able to keep our game simple, and team defense has allowed us the opportunity to be around in the later parts of games," Blues forward Jamal Mayers said. "Then we're able to capitalize on our opportunities."

St. Louis is the best defensive team in the league 119 goals gainst in 58 games and the Blues have allowed the fewest shots, with an average of 22 per game.

Hecht snapped a 1-1 tie with 3:02 left in the second period. Stephane Richer took advantage of a giveaway by Nashville defenseman Bob Boughner and set up Hecht, who was wide open in the left circle.

"That's a play that has to be made," Boughner said.

Nashville's Cliff Ronning got the only goal of the first period on a give-and-go with Kimmo Timonen. Ronning skated up the middle and dished to Timonen, who fed back to Ronning in the slot for a one-timer that whistled by Turek.

The goal was the 20th of the season for Ronning, the eighth time in his NHL career that he has reached that mark.