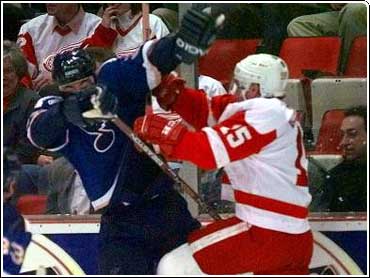 Chris Pronger thinks St. Louis belongs with the NHL's elite teams. The way the Blues are playing, he could be right.

Michal Handzus scored the go-ahead goal as St. Louis won its sixth straight with a 4-1 victory over Detroit on Tuesday night, the Blues' first road victory over the Red Wings in almost three years.

Jamal Mayers, Marty Reasoner and Scott Pellerin also scored for the Blues, who have lost twice at Joe Louis Arena this season. Detroit hadn't lost to the Blues at Joe Louis since April 13, 1997, going 6-0-2 against them on home ice over that span.

"It doesn't all fall on one guy anymore," Pronger said. "We can spread the scoring around now, and we can play defense."

Larry Murphy scored for the Red Wings, who lost their third straight their longest skid of the season.

Handzus broke a 1-all tie with his 14th goal at 3:53 of the second period. Handzus skated into the left circle and snapped a shot that sailed into the upper right corner over the outstretched glove of goalie Chris Osgood.

Reasoner made it 3-1 with his fourth goal at 7:08 of the second and Pellerin scored his fifth at 2:18 of the third.

"We didn't get good goaltending," Detroit coach Scotty Bowman said. "You can't put it all on the goaltender. But we've got to get better play than that. They scored some unusual goals tonight.

"The first goal was just a wrist shot, but our guy was in a bad position."

Mayers gave St. Louis a 1-0 lead with his fourth goal, beating Osgood at 4:15 of the first period.

"The first goal was a bad goal, and hen they got a couple of lucky ones," Osgood said. "We've got to stop talking and start playing, that's all."

Murphy's power-play goal tied it 1 with 1:15 left in the first, beating goalie Roman Turek while Stephane Richer served a bench minor for too many men on the ice.

The Blues, outshooting Detroit 30-22, solidified their hold on first place in the Western Conference and Central Division, five points ahead of second-place Detroit.

"I really didn't want to overemphasize the importance of the game," St. Louis coach Joel Quenneville said. "You want them to know that it's important, but at the same time you don't want to have a life and death situation."

"Any time you're in first place, you want to get that top (playoff) seed," Pronger said. "We're glad to get one more rung ahead of them. But we know they're going to turn it up another notch Thursday."