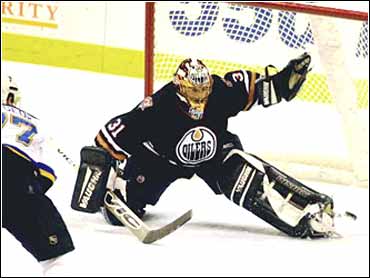 Without Pavol Demitra, the St. Louis Blues put up some more big numbers.

Pierre Turgeon had two goals and an assist as the Blues took over first place in the NHL on Monday night with a 5-2 victory over the Edmonton Oilers.

The Blues are 13-1-1 in their last 15 games and lead the Avalanche by one point for first place. They outshot the Oilers 39-21 in their first game without Demitra, their No. 2 scorer who sustained an eye injury in Saturday's victory over Phoenix.

"I think we've got to keep riding that wave," Turgeon said of the Blues, who scored 45 goals their last 10 games. "You don't want to be sitting on it."

Turgeon snapped a six-game goal slump with his first scores since a hat trick on Dec. 15. Chris Pronger and Al MacInnis each had a goal and two assists and Scott Young got his team-leading 19th.

"We got outworked, and when that happens you usually get beat," said the Oilers' Doug Weight. "Hence, the outcome."

Oilers coach Craig MacTavish closed the locker room for more than 10 minutes after the game and had to be coaxed out for postgame comments.

"They pulled our pants down and gave us a spanking," MacTavish said.

Rookie goalie Brent Johnson faced only 10 shots the first two periods, but surrendered two late goals after the Blues led 5-0. Ryan Smyth got his 16th at 12:19 of the third and George Laraque his seventh at 13:50.

"Nothing you can really do about it, it just makes you mad," Johnson said. "It was weighing on my mind. It could have been a lot easier."

Johnson, who has an NHL-leading 1.47 goals-against average, is 14-1 as Roman Turek's backup.

St. Louis is 16-2-2 at the Savvis Center, continuing the best start in franchise history. Two of the Blues' goals came in the final minute of the first and second periods.

"It's certainly a heartbreaker anytime you score in the last minute or even the first minute of a period," MacInnis said. "If you check team's records, it's a big difference."

Turgeo gave the Blues the lead with 6.2 seconds left in the first. Tommy Salo bobbled Turgeon's shot from the slot and the puck trickled between his legs.

Dallas Drake faked a shot from the left point and passed it to a wide-open Young in the slot at 2:43 of the second. MacInnis made it 3-0 at 19:28 of the second with a power-play goal, ripping a shot from near the blue line past Salo.

Joaquin Gage replaced Salo for the third period and gave up two goals. Turgeon scored at 6:42 and Pronger scored with a two-man advantage at 10:09 for a 5-0 lead.

"I felt Tommy had seen enough," MacTavish said. "And that's all. I wasn't going to expose him to any more."