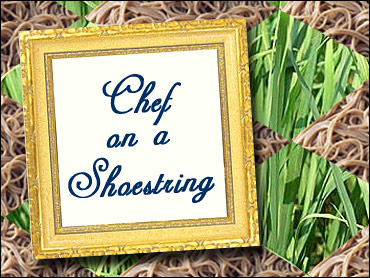 Johan Svensson started his career in the restaurant business as a dishwasher in his homeland Sweden.

His hard work paid off, and he landed in America in 1997 in the three-star kitchen of his fellow countryman Marcus Samuelsson.

Chef Svensson is the executive chef at Riingo near the United Nations in New York City.

He serves up inventive American cuisine with Asian accents.

Here is the meal for four he created with a $40 budget.

Method:
1. First prepare your corn stock. Cut corn kernels from cob, and using the back of your knife scrape the cob to get the "milk" out. Set aside the corn kernels. Cut your corn cobs in half.
2. Add 2 quarts of water to a heavy-bottomed pot. Add the corn cobs, carrot, onion, one clove of garlic, and bay leaf to the pot. Cover and bring to a boil, then lower heat to medium and cook for about 40 minutes.
3. Strain and discard the carrot, onion, garlic clove, corn cobs, and bay leaf. Reserve the corn stock.
4. Then in a saute pan, using medium-high heat, warm the olive oil. Then add the corn kernels, remaining garlic clove, chili, and the smashed lemongrass. Saute for about five minutes or until the vegetables are soft, but not browned. Stir in the coconut milk, and the reserved corn stock.
5. Then using low heat, simmer the soup for 30 minutes.
6. Puree in batches in a blender. Then strain using a fine mesh strained. Add lime juice. Season with salt and pepper.
7. Chill for one hour prior to serving.

*Chef's note: You may use vegetable broth instead of making your own corn stock.

Method:
1. In a pot, bring water to a boil. Add your soba noodles. Cook noodles for four minutes. Soba noodles cook much faster than dry Italian pasta.
2. Strain noodles. Chill noodles in the refrigerator until ready to use.
3. In a pot, bring salted water to a boil. Have a bowl ice cold water ready. Add baby bok choy. Cook for about 1 minute. Plunge baby bok choy into the bowl of ice cold water. This will cool the baby bok choy quickly. Drain in a colander. Cut baby bok choy in half. Set aside.
4. In a small saucepot, using medium-low heat, heat the sake until it is warm. It should not come to a boil. Remove from heat and combine with soy sauce. Set aside.
5. In a bowl combine sesame seed oil and 5 Tablespoons of olive oil. Set aside.
6. Heat a saute pan using medium heat. Add the sesame seed/olive oil mixture to the pan. Add the ginger, shallot, garlic and saute for three minutes. Then add mushrooms and blanched baby bok choy. Cook for another minute.
7. Add soy sauce-sake mix to the vegetables. Stir. Add butter. Toss. Cook for an additional two minutes.
8. Remove from heat. Add the soba noodles. Quickly toss. Then add scallions. Toss again.
9. Score bluefish filet on the skin side. Season both sides with salt and pepper. Heat the remaining tablespoon of olive oil in a saute pan using medium-high heat. Place fish skinside down. Cook for about 3 to 4 minutes. Turn the fish over and cook for another two minutes. Repeat method for remaining filets.

For plating: Evenly divide the noodles among four plates. Then place a bluefish filet on top of the noodles.

Method:
1. On low heat, heat vanilla-flavored soymilk in a sauce pot along with white sugar until the mixture is simmering. Stir occassionally. Turn off heat and let mixture sit for about 10 minutes.
2. In the mixing bowl of a standing electric mixer, whisk eggs using medium speed. Drizzle in the heated soymilk. Whisk until mixture is thoroughly combined.
3. Pre-heat oven to 350-degrees.
4. Divide the custard mixture evenly among the four ramekins.
5. Place ramekins in a baking pan. Pour hot water into the baking pan, to within about 1 inch of the top of the ramekins.
6. Place in the oven uncovered. Bake for 25 minutes.
7. Remove the ramekins from the water bath. Sprinkle the sugar in the raw over each custard.
8. Using the kitchen torch, burn the sugar until it caramelizes. You may place the ramekins in the broiler for two minutes if you do not own a torch.