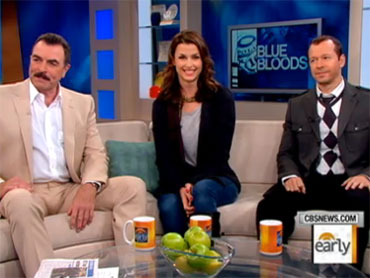 The stars stopped by "The Early Show" on Friday.

Selleck said "Blue Bloods" is a change from the antiheroes often seen on TV.
"We want to do a show about heroes, and I think that is the perception and reality with NYPD police officers," he said.

Moynahan said she was drawn to the show because of Selleck and Wahlberg.

"There was already an ease there and comfort that I was really looking forward to being with and it's been the same way," she said. "Our first day altogether with a family scene, we shook hands, introduced ourselves and dove right into the relationship."

Selleck added, "The family dinner scene was our first day's work, so it was kind of, 'How do you do? We're family.'"

In addition to family relationships, "Blue Bloods" is all about the Big Apple, Selleck said.

Filmed on-location in New York City, Selleck said the show is better because it's filmed where it's actually written to be.

Selleck called New York "another character on the show."

He explained, "It was clear it reflected that in the script, and it's pretty hard to argue it's not a better show to shot here."

But for Wahlberg, a Boston-native, the adjustment to New York and playing a New York cop, is sometimes out of his comfort zone.

He told "Early Show" co-anchor Harry Smith, "I'm begging them to let me be a Mets fans, the writers. They still want us to be a Yankee fan but I'm trying to, you know, I'm sliding my paychecks back under the table to let me wear a Mets hat in the show instead of a Yankees. But out in the streets it's great, you know, it's a lot of fun. I think since the Red Sox won the World Series, New Yorkers have lightened up with torturing us Bostonians."

For more with the cast of "Blue Bloods," check out the video below.