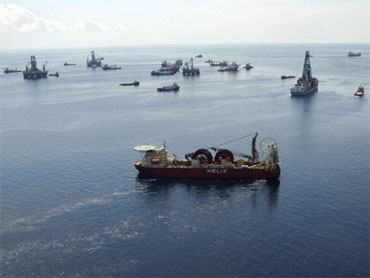 After five long months, the broken well that spewed millions of gallons of oil into the Gulf of Mexico is on the verge of being plugged once and for all.

A relief well drilled nearly 2.5 miles beneath the floor of the Gulf of Mexico has intersected BP's blown-out well, a prelude to permanently killing it, the U.S government said late Thursday.

Retired Coast Guard Adm. Thad Allen, the government's point man on the oil spill, said in a statement that data shows the two wells are joined. The next step will be to pump mud and cement down through the relief well to seal the ruptured well from the bottom.

The final seal should happen by Sunday, five agonizing months after an explosion killed 11 workers, sank a drilling rig and led to the worst offshore oil spill in U.S. history.

The gusher was contained in mid-July after a temporary cap was successfully fitted atop the well. Mud and cement were later pushed down through the top of the well, allowing the cap to be removed. But the blown-out well cannot be declared dead until it is sealed from the bottom.

The April 20 blast sank the Deepwater Horizon rig and triggered the spill that eventually spewed at least 206 million gallons of oil into the Gulf. BP PLC is a majority owner of the well and was leasing the rig from owner Transocean Ltd.

The disaster caused an environmental and economic nightmare for people who live, work and vacation along hundreds of miles of Gulf shoreline from Florida to Texas. It also spurred civil and criminal investigations, cost gaffe-prone BP chief Tony Hayward his job and brought increased governmental scrutiny of the oil and gas industry, including a costly moratorium on deepwater offshore drilling that is still in place.

Gulf residents will be feeling the pain for years to come. There is still plenty of oil in the water, and some continues to wash up on shore.

Many people are still struggling to make ends meet with some waters still closed to fishing. Shrimpers who are allowed to fish are finding it difficult to sell their catch because of the perception - largely from people outside the region - that the seafood is not safe to eat. Tourism along the Gulf has taken an enormous hit.

BP took some of the blame for the Gulf oil disaster in an internal report issued earlier this month, acknowledging among other things that it misinterpreted a key pressure test of the well. But in a possible preview of its legal strategy, it also pointed the finger at its partners on the doomed rig.