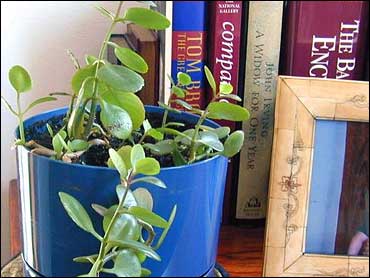 During the drab winter months, you can bring a little bit of summer garden cheer indoors with colorful, blooming houseplants.

Garden designer P. Allen Smith stopped by The Saturday Early Show to show off some of his favorite houseplants and share some ideas on how to care for them.

Smith says houseplants are not hard to care for, and their bright colors can be a welcome sight in the dead of winter. The most common mistake people make when caring for plants has to do with watering -- either over-watering or not watering enough. Smith says it's better to err on the dry side rather than watering too much. Just keep your plants consistently moist, not consistently saturated, and they will perform beautifully.

Even though your plant might dry out some from the heat in your home during the winter, Smith says to only add a little extra water. Too much water will suffocate the roots.

To help create humidity, and thus prevent you from over-watering, Smith says to place a saucer of gravel and water under the plant. This helps keep the air around your plant moist. Just make sure the bottom of the plant's container is above the water line.

Also, too much chlorine in your water can harm your plants. You can easily de-chlorinate your water by filling the water can and leaving it out for about 24 hours before watering. Smith says to be sure the water temperature pleasant to the touch -- not cold or hot. Your plants will appreciate it and they'll drink more of it.

People also tend to overfeed their houseplants in the winter. Just like outdoor plants, the prime growth season for houseplants is spring and summer. Smith says houseplants will do fine if they are fed every 3 to 6 months using a liquid fertilizer, with a 5-10-5 ratio.

If a plant is looking tired and weak, we automatically think it's time to feed it again. But, fertilizer isn't a cure. If a plant isn't in an active growth stage and you put fertilizer around its roots, the fertilizer will just sit there; it won't be absorbed. Smith says this can ultimately damage the plant. Again, he recommends feeding the plant every 3 to 6 months.

It's natural for a plant to produce a few yellow leaves this time of year. This is particularly true if a plant has been moved to a new location in your home. But, if it produces a lot of yellow leaves all at once -- five or six -- you may be over-watering, or the plant may be suffering from a lack of light.

Cyclamen is a very popular houseplant. The hybrid cyclamen has a much larger flower and has become a houseplant favorite for most gardeners. Cyclamens come in a wide range of colors, from white through the various shades of pink into deep red. Plus, Smith says, the heart shaped, variegated foliage is its own masterpiece. The blooms are known to last for a long time, up to four months, if you choose one with plenty of emerging buds.

To keep cyclamen in tip-top shape, don't let them become dry and wilted because they rarely recover. The plants like bright indirect light. Full sun is hard on their leaves and blooms. Keep the soil consistently moist, well drained and neutral.

Smith says the orchid is one of his favorite houseplants because it has a long duration of blooms. Smith uses orchids often in containers with other houseplants such as cyclamen, variegated English ivy and ferns.

One of the easiest orchids to grow is the phalaenopsis. It's the perfect choice if you're a beginner at growing orchids, says Smith. The phalaenopsis orchid produces spectacular sprays of solid or variegated white, pink, lavender, yellow and even red blossoms.

When you select one, go for a plant with mature flower buds rather than one with open blooms and healthy foliage. This will ensure a longer bloom period, which can last up to three months.

Orchids can take low light conditions. It would be fine in temperatures comfortable to you. Smith says you don't really have to worry about the soil because orchids actually prefer the bark of fir trees. Some growers like to create a similar growing medium by blending 50-50 fir bark and lava rock.

Orchids are light eaters. You only need to use 25 percent of the amount recommended on the liquid-fertilizer label and they only need to be fed about every other week. Orchids also get salt build-up from fertilizer so it's important to wash that out when you water.

After the blooms fade, cut the stalk down to about the second or third node and reduce fertilizing to once a month.

Smith says orchids may take a little bit of work. But, how many houseplants can you name that remain in bloom for up to three months and sometimes even four months? Plus, if you give them the proper care, they can be around for as long as 30 years.

If treated well, African violets will bloom continuously all year long. Smith says it's easy to see why they are so popular. The wrappers seen around African violet containers are very telling. They're not just for decoration, they are placed around the plant for shipping to keep moisture from getting on the leaves.

Water on the foliage can damage them. Smith says the following watering tips can prevent getting droplets on the fuzzy little leaves.