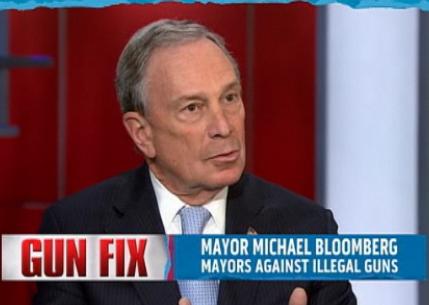 New York City Mayor Michael Bloomberg on Tuesday challenged President Obama to "stand up" on gun control, an issue on which he has been largely silent in the wake of the tragic shootings in Tucson.

During an interview on MSNBC, the a longtime gun control advocate argued that the White House, along with Congress, needs to be more vigilant in enforcing existing laws regarding the sale of firearms.

"The trouble is that the Congress has done this - and they do it repeatedly - they pass a law showing they're tough on the bad guys and then they don't give you the wherewithal to enforce it," Bloomberg told MSNBC's Rachel Maddow.

Bloomberg argued that Mr. Obama could quickly expedite the enforcement of such laws, pointing to a federal database that aims to compile the names of Americans who should not be legally authorized to buy guns.

"The federal law requires the states to do it but there's ten states that have never sent one name and there's 20 states that have sent less than 100," Bloomberg said. "Think about the tens of thousands of drug-addicted people in this country; the people that have mental problems and shouldn't be allowed to buy guns; the people who have been convicted of crimes; none of this data gets into this database."

"Some of that stuff the president could fix right away and I urge him to do that," Bloomberg added. "He could stand up and say to federal agencies that he directs, 'You will send the data to this database, and I want you to certify, let's say every six months to me, that you are doing that.'"

As evidence of what he believes are poorly-enforced gun regulations, Bloomberg played a video showing an undercover investigator succeed in illegally purchasing a gun at an Arizona gun sale.

(Watch the video at left.)

Bloomberg emphasized, however, that his main goal is to push the enforcement of laws surrounding existing regulations - not legislating in other states.

"We're not trying to tell Arizona what their laws should be," he said. "All we're saying is, you've got to stop this, federal government, because no city, no state, can do it on your own."

Bloomberg has made gun control a cornerstone of his tenure as New York's mayor. In 1996, he formed "Mayors Against Illegal Guns" - a coalition of more than 500 U.S. mayors that fights for stricter gun regulation.

"The bottom line is, let's make our cities safe. I think the president and Congress have to get together and stand up and say, 'enough,'" he said.

President Obama has been criticized by gun control advocates for not taking a strong stance on the issue, one that Democrats have largely shied away from in recent years. White House officials have suggested he will address gun regulations in the coming weeks.