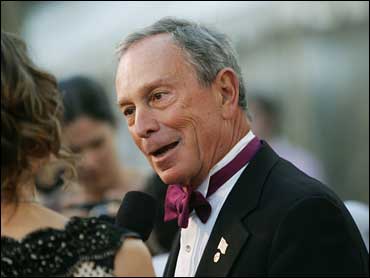 Mayor Michael Bloomberg, a potential presidential candidate, said none of the White House contenders has offered a health care plan that works, and he suggested that socialized medicine "may not be all that bad."

In a meandering interview Tuesday night moderated by journalist Tom Brokaw at the Cooper Union school, Bloomberg declared that "this country's in real trouble, and somebody's got to pull it out."

While he insisted that he has no desire to be that person, he said health care is an example of an issue on which none of the candidates has the right answer and their various proposed plans "don't really work."

He singled out one element that is featured in a number of plans, including the much-hyped proposal that Sen. Hillary Clinton, D-N.Y., unveiled last week: the requirement that businesses provide health insurance for employees.

"We all know there is a very large economy run off the books," said Bloomberg, who is a former CEO. "How are you going to really make sure that every company really does provide health care?"

"I don't see how these plans force a solution to the problem," he added.

"I think the life expectancy is better there and they don't have to pay as much," he said. "It may not be all that bad."

He declined to offer his own health care solution.

Despite Bloomberg's apparent interest in the details and plans of the presidential candidates, he insisted he plans to finish his term, which ends in 2009.

He reasoned that being president might not be as good as being mayor of a city, where a whim can become a policy overnight.

Example: Tonight Bloomberg could issue an order to reverse the southbound traffic flow on Fifth Avenue.

"It may be a dumb idea, but tomorrow morning there'd be a cop on every corner, every sign would be changed - I mean, it would go northbound," he exclaimed. "That's pretty heady stuff. Presidents can't do that."