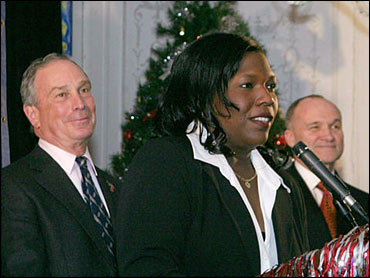 The balancing act between caution and celebration amidst the war on terror hit some political nerves Wednesday as Mayor Bloomberg fired back quickly and clearly when a lawmaker from neighboring Connecticut suggested Times Square certainly wasn't the place to be on New Year's Eve.

Republican Congressman Christopher Shays urged revelers not to attend New Year's Eve celebrations like the one at Times Square this year. New York's mayor countered that Shays could use an infusion of courage.

A member of the House Select Committee on Homeland Security and chairman of a terrorism subcommittee, the Connecticut Republican told WVIT-TV on Tuesday that he wouldn't go to Times Square "for anything."

But Shays said it is irresponsible for officials to make people think they don't need to take precautions, like avoiding packed crowds in New York City.

Shays added, "I wouldn't go into places when you're packed and where if there was panic, a lot of injuries would take place."

Bloomberg suggests that Shays might want to spend some time with Shoshana Johnson, the former Army private who was a prisoner of war in Iraq, who was chosen to help the mayor drop the ceremonial crystal ball in Times Square.

"She was a woman fighting to protect the congressman's freedoms," said Bloomberg, in an NBC "Today Show" interview. "She was captured and wounded in Iraq. Maybe he should call her and learn a little bit about courage."

Some Connecticut communities were hoping Shay's comments would be a boon to their own festivities. Danbury organizers were selling buttons to their First Night celebration, a myriad of family activities, nightlife like karaoke and dance parties, and a countdown.

"If there are security concerns, people stay home and come here," said Betsy McIlvaine, a First Night Danbury board member. "He should have said, 'Come to Danbury.'"