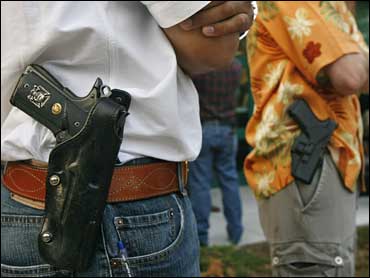 More than 200 firearms enthusiasts — most of them openly armed — packed a normally sedate government building Thursday night, hoping to win a pistol or rifle and at the same time send a defiant message to New York Mayor Michael Bloomberg and other gun-control advocates.

One of the dealers is Robert Moates, who's been selling guns for almost 50 years.

"I just don't believe we did anything wrong," says Moates. "I think Bloomberg is just trying to get a lot of publicity."

New York police say that since 1994, they've traced 22 guns, some that were used in homicides, back to Moates' shop. But attorneys for the gun store owners maintain the dealers are the victims, and this spring, Virginia passed a law making stings like Bloomberg's illegal, reports Alfonsi.

Two guns were awarded, a Para-Ordnance pistol and a Varmint Stalker rifle, each worth about $900. Nancy Yamada of CBS News affiliate WUSA-TV reported the winners were not able to walk away from Thursday's event toting their new weapons — they will still be required to undergo federal and state background checks before collecting the guns at shops later.

The first winner, Jay Minsky of Fairfax, responded with an obscene hand gesture when asked what message he hoped to send to Bloomberg.

"If he doesn't like people in New York having guns, he should deal with New York," said Minsky, who grew up in Brooklyn. "Just keep out of Virginia."

The event drew an overflow crowd at a Fairfax County government building, with the fire marshal aggressively enforcing an occupancy limit of 150 for the meeting hall. Others stood outside and peered in through open windows.

(AP Photo/Jacquelyn Martin)
Yamada reported a smaller group — about a dozen — protesters also turned up for the event, including some parents of people killed in the Virginia Tech massacre. Instead of guns, they came to Annandale with signs and photos.

Peter and Cathy Read of Annandale, whose daughter Mary was one of those victims, silently held a photo of their daughter outside the building.

"We're not here to have a debate. We're here to witness for our daughter," Peter Read said. "The victims need to be witnessed to. People of the commonwealth can make intelligent decisions about what's right."

Philip Van Cleave, the league's president, said he is sympathetic to the families but maintained that some of the deaths might have been prevented if somebody had been armed.

Most of those in attendance said they were motivated not by the chance of a free gun, but to make a point to Bloomberg and express support for the Second Amendment.

"It'd be nice if I win, but that's not what this is about. It's about my constitutional right to defend myself," said Ron Stuebing of Sterling, a VCDL member.

The event had been planned for months as a fundraiser for two gun shops being sued by New York City. A raffle ticket was awarded for every $100 in purchases at the two gun shops, Bob Moates Sport Shop in Richmond and Old Dominion Gun and Tackle in Danville.

But officials said that giveaway violated state gambling laws, so the league quickly organized a new giveaway, open to anybody who showed up at its Thursday night meeting.

Most but not all in attendance carried holstered handguns. In Virginia, individuals need a permit only to carry a concealed weapon. Openly visible, holstered guns are permitted without a permit.

Anybody who showed up at Thursday's event was eligible for the drawing — except Bloomberg and his immediate family, who were explicitly excluded from the contest by VCDL organizers.

New York City officials have sued gun dealers from Georgia, Ohio, Pennsylvania, South Carolina and Virginia in federal court. The lawsuits were filed after private investigators went into the stores with hidden cameras and simulated an illegal straw purchase — in which one person fills out the paperwork and buys the gun for somebody else.

Justice Department officials have said that the private investigators conducting the stings may have been breaking the law themselves, and that none of the gun dealers caught in the stings would face federal prosecution.

Bloomberg and Virginia Attorney General Robert McDonnell also traded barbs after McDonnell told Bloomberg the stings were unwelcome and illegal under a new Virginia law that takes effect in July.

Asked Thursday about the giveaway, Bloomberg said, "I think it's sick, is the nicest ways to phrase it."

Van Cleave responded that the members of his organization are law-abiding citizens, including many retired military, police officers and firefighters.

"If you're saying these are sick people, then I'm proud to be sick," Van Cleave said.