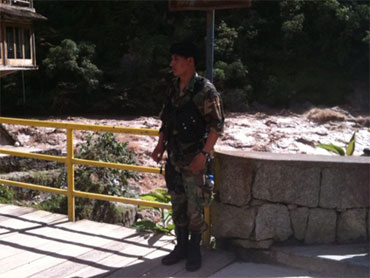 The members of Blondie admit it's a bit weird to be on the music scene again when bands like the Rapture are named for one of their songs, and '80s fashion is so hip that girls shamelessly wander the streets in hot-pink leg warmers.

While they don't mind the flattery, they do think musicians modeling their sound on '80s rock should be digging deeper into music history.

Blondie, who plays Wednesday at First Avenue in Minneapolis, put new wave punk on the radar as they skipped among many styles, from reggae and rap to rock and disco. Their hit "Rapture" was one of the first songs to blend rock and hip-hop, and sultry lead singer Deborah Harry was among the first females to front a rock band.

"We were referencing a lot of stuff when we first came out like Jimi Hendrix and the Rolling Stones," said guitarist Chris Stein. "But young kids aren't going back far enough, they aren't getting to the real meat of things by only using us or someone else from that time as a reference."

Not that Blondie is history. After a 16-year hiatus, the four founding members of the band — Harry, Stein, drummer Clem Burke and keyboard player Jimmi Destri — reunited and have made two albums in the past five years.

"Blondie's always been a concept piece," Burke said. "We go do other things, and always come back to it."

Their latest effort, "The Curse of Blondie," is a throwback to the good old days. There's a Harry rap nestled in the song "Good Boys," and "Hello Joe" is a tribute to fellow punk Joey Ramone.

Blondie's music was considered counterculture during the early '80s, when the band performed at the seminal CBGBs club in New York. Now, Blondie argues, their brand of punk pop is mainstream.

"It's the way culture works," Harry said. "What was alternative then is now a fabric of popular culture."

The band produced six albums before breaking up in 1982. Songs like "Heart of Glass," "The Tide is High," and "Call Me" were huge hits, and their album "Parallel Lines" sold more than 20 million copies worldwide. Five years ago they got back together to record "No Exit."

During a recent interview, Harry, still looking like a sexpot at 58 with wild hair and bedroom eyes, sits in a dimly lit Manhattan conference room with her cohorts. Stein wears faded jeans and shields his eyes with a pair of black shades. Burke, also wearing dark sunglasses, is dressed in a maroon suit a la Roy Orbison.

"He said she was shameless and all vile and all this stuff," Stein said. "But look at what's going on now!"

"Don't get me wrong, I approve of sex," Harry said with a sly grin. "It's a great thing. And a lot of great women use their sexuality. It is not a big deal."

The band is optimistic about their new CD, saying their fan base includes both veteran Blondie lovers and teenagers. They are touring across the country this summer.

"The inspiration, the sound of the band is from the city," Burke said. "It was the way we dealt with things. I don't know if we could have done it anywhere else."

Harry said she used to write songs in a laundromat in New York's Lower East Side.

"All those rhythms going on, it's a great place," she said. "But it was the city, too. Being there in the city."