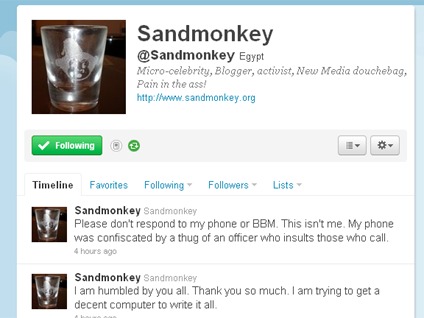 A Cairo-based blogger whose site was yanked down by the government said he was stopped by "pro-Mubarak goons" while trying to deliver medical supplies as the police took away his car keys and phone, letting crowds attack the group of people he was with and destroy his car.

"I was beaten in my face, scratched. There was glass everywhere from all the glass they shattered," said Mahmoud Salem, 29, who writes the blog Sandmonkey.org.

Salem was traveling with two other men and two women Thursday afternoon in a Kia Sorrento.

"The Cops took away my key and phone and had us stay in the car when people gathered around us, people were walking on top of the car, breaking off the side view mirror, throwing it to break other windows, kicking the car on all sides," Salem said. "We were there for 35 minutes while I was begging police to save the car, or let us leave because the girls were terrified. People were grabbing rope and telling us they would lynch us. It was a horrific experience."

The group was then taken to a police station where they waited for about two hours before being released. No police reports were filed. He was never given back his phone, but he was given back the car's front license plate - the only thing left of it after it was destroyed by the angry crowds.

When Salem returned, he learned that his blog had been disabled. In the last post before he was arrested he wrote, "I have been battling fatigue for not sleeping properly for the past 10 days, moving from one's friend house to another friend's house, almost never spending a night in my home, facing a very well funded and well organized ruthless regime that views me as nothing but an annoying bug that its time to squash will come. The situation here is bleak to say the least."

"This is a losing battle and they have all the weapons, but we will continue fighting until we can't," Salen wrote. "I am heading to Tahrir right now with supplies for the hundreds injured."

He called on others to bring medical supplies to Tahrir Square. "Egypt needs you. Be Heroes."

Salem is still able to use Twitter. His handle is Sandmonkey.