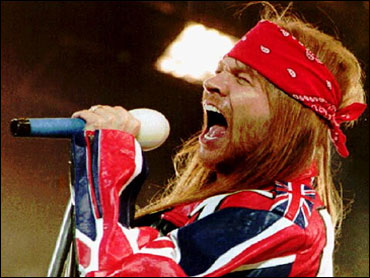 A blogger suspected of streaming songs from the unreleased Guns N' Roses album "Chinese Democracy" on his Web site was arrested Wednesday and appeared in court, where his bail was set at $10,000.

In later posts, Cogill wrote that the FBI had questioned him and asked his readers if any of them knew a good attorney. He was represented Wednesday by a federal public defender.

According to an arrest affidavit, Cogill admitted to agents that he posted the songs on his Web site. Prosecutors said Wednesday the leak could result in a "significant" financial loss for the band.

Cogill will not face any special Internet restrictions, but was ordered to appear in court for a preliminary hearing on Sept. 17.

"Guns N' Roses representatives have been made aware of the arrests and are leaving the matter to the authorities," said Larry Solters, the band's spokesman.

"Chinese Democracy" is a much anticipated - and repeatedly delayed - new album by Guns N' Roses that is more than 10 years in the making. At least one of the album's songs could be heard legally: The band wrote on its Web site in July that its track, "Shackler's Revenge" will be featured on the video game Rock Band 2, slated for release in September.