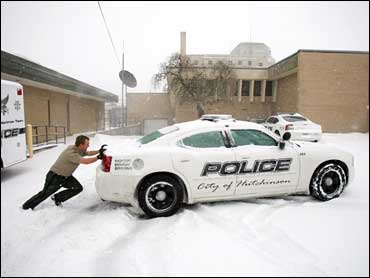 Parts of the Southern plains woke up this morning to a paralyzing early Spring blizzard that's left roads closed and hundreds of travelers stranded.

At least two people are dead from a blizzard that has gripped the southern High Plains for more than 24 hours.

In Oklahoma, 16 inches of fresh snow have fallen and there are snow drifts as high as 11 feet in a state where any snow is an unprecedented event at this time of the year. Thousands are without power.

Gov. Brad Henry declared a state of emergency for much of Oklahoma, allowing state agencies to make emergency purchases to deal with the storm and starting the process of seeking federal assistance should it be necessary.

"Ice and snow resulting from this winter storm poses serious challenges to everything from roads to power lines, and so it is critical that we be prepared for the worst," Henry said.

One person was killed when his pickup truck failed to negotiate a curve in the rain on a highway in central Oklahoma and more than two-dozen other accidents were reported with the storm, the
Oklahoma Highway Patrol reported.

One truck driver was hospitalized in critical condition after his rig went out of control on rain-slickened U.S. 412 about 5 miles east of Enid in north-central Oklahoma, Highway Patrol spokesman Chris West said. The vehicle overturned and the driver was pinned for an hour before he could be freed.

In Kansas, heavy snow and winds of 40 mph or more created dangerous driving conditions, multiple traffic accidents - including at least one reported fatal crash - and closed roads as the storm system headed east.

The Kansas Adjutant General's Office said Friday afternoon that one person was reported to have died in a weather-related traffic accident in Marion County. A spokeswoman with the office said she did not have details about the accident, in which two other people were injured.

The National Weather Service reported 12 inches of snow with 4-foot drifts in Syracuse, west of Garden City near the Colorado line.

Jerilyn Billings, a weather service meteorologist in Wichita, said Hutchinson should expect snow falling at the rate of two inches per hour before letting up in the afternoon.

"We're still looking at our area getting around 12 inches of snow over the period of the storm," Billings said in a story posted on The Hutchinson News' Web site. The blizzard warning for the area will likely continue until 1 a.m. Saturday, she said. 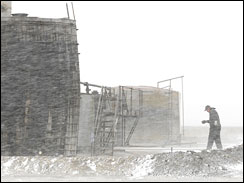 Ice was building up all over southeast Kansas before being replaced by snow. Authorities reported up to a quarter-inch coat of ice in Arkansas City and similar reports around the region.

Forty-miles-per-hour winds at the Colorado-Kansas border created white-out conditions and made driving there treacherous.

But at Denver International Airport things were getting back to normal after intense spring storms created havoc conditions in Colorado one day earlier, forcing flight cancellations and road closings.

Blizzard warnings remain in effect until Saturday afternoon for parts of the Texas Panhandle, with spots of blowing snow and winds of up to 30 mph.

A spring blizzard slammed into the Texas Panhandle, causing numerous accidents, shutting down major highways and paralyzing the region in which snow drifts as high as 20 feet were spotted. Nearly all flights were cancelled at the airport in Amarillo, Texas.

The National Weather Service is predicting snowfall in Texas of up to a foot and winds gusting to more than 45 mph that could lead to zero visibility and snowdrifts of up to 11 feet before the storm wanes near midday Saturday. The worst of the eastward bound storm should be in Oklahoma later Saturday.

A blizzard doesn't have to have heavy snowfall, said weather service meteorologist J.J. Brost in Amarillo. But that snow must be combined with sustained winds or gusts of at least 35 mph that limit visibility to a quarter-mile or less.

Twisters In The South

A spring storm dumped heavy rains, baseball-sized hail and whipped up winds across the Southeast on Saturday, flooding homes and cars in parts of Mississippi and Alabama.

About 100 roads in southern Mississippi were impassable because of the flooding, including the main route into Biloxi, Harrison County Emergency Management Director Rupert Lacy said. Some residents had to be rescued from their stalled and stranded cars, and others were helped from their flooded homes, Lacy said. 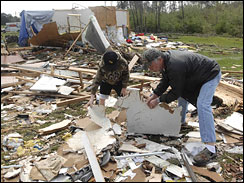 Tornado warnings were being issued across the region, which is still reeling from twisters over the past two days. On Thursday, nearly 30 people were hurt when a tornado destroyed dozens of homes and businesses across south-central Mississippi. On Friday, tornadoes struck Louisiana, Alabama and North Carolina.

No injuries were immediately reported Saturday. At least three people in southern Mississippi were at a shelter opened by officials.

"We've still got water standing in a lot of areas," Lacy said. "Some of the rivers are still coming up, that's our biggest concern right now, protecting life and property."

Up to 17 inches had fallen over three days in isolated areas in Alabama and Mississippi, said National Weather Service meteorologist Kirk Caceras.

In Mississippi, Lacy said officials were still trying to determine how many homes had been flooded and the extent of the damage.

Louisiana communities braced for a third night of heavy rain Friday as forecasters said storms could bring more flash flooding in some areas and push swollen rivers north of New Orleans over their banks.

Flash flood watches for all of southeastern Louisiana were to last through Saturday morning. Also, the National Weather Service said light to moderate flooding along rivers in low-lying areas north of Lake Pontchartrain was expected.

And there was a threat of more high winds and isolated tornadoes, such as those believed to have caused widely scattered building damage and at least one minor injury overnight Thursday.

Authorities were keeping an eye on the Bogue Falaya in St. Tammany, the Bogue Chitto in Washington Parish and the Tangipahoa River in Tangipahoa Parish - all communities on the north shore of Lake Pontchartrain, where the rivers were expected to crest above flood stage at different times over the weekend.

"At this point, we are only expecting trouble in the normal low lying areas and everyone who lives in those areas is aware," she said.

There were reports of damage across the area. Along Interstate 95, several callers reported trees snapped in half, signs down, and a tractor-trailer blown on to its side.