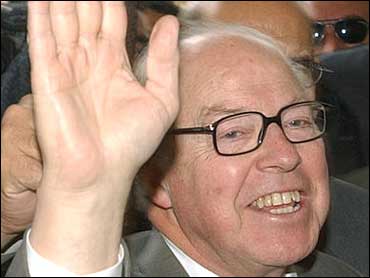 U.N. disarmament chiefs went face to face with their Iraqi counterparts Saturday in "useful" and "very substantial" talks to find out what Baghdad did with stores of anthrax, nerve gas and other forbidden arms.

After more than four hours of meetings, U.N. nuclear watchdog Mohamed ElBaradei reported the Iraqis had presented unspecified "explanations on some of the issues." The discussions resume on Sunday.

The talks were pivotal, but they were "not the last chance" for peace, ElBaradei said, clearly seeking to counter talk in Washington that the time for diplomacy had all but run out.

ElBaradei and chief U.N. arms inspector Hans Blix were looking for quick Iraqi concessions on practical matters in the disarmament effort here, such as clearance to fly American U-2 reconnaissance planes in support of their inspections.

They were also hoping to ensure that meetings continue with weapons scientists in private. Another scientist submitted to a private interview Saturday - the fifth in three days - signaling a possible breakthrough on this issue.

But they also wanted more: Documents, testimony or other evidence to clear up discrepancies in Iraq's accounting for weapons of mass destruction produced and weapons destroyed over a decade ago.

For instance, inspectors have noted discrepancies between documented amounts of VX nerve agent produced and the amounts certified as having been destroyed in the early 1990s.

The first round of high-level talks opened just after 4 p.m. Saturday with a scheduled hour of high-level discussion between Blix, ElBaradei and Lt. Gen. Amer al-Saadi, a Saddam Hussein adviser and head of the Iraqi delegation. More than three hours of a full meeting between delegations followed.

Afterward, Blix told reporters, "It is useful discussions we are having. ... It was a very substantial discussion." But neither he nor ElBaradei provided any details of what "explanations" the Iraqis offered.

A U.N. official confirmed to CBS News reporter Charles D'Agata in Baghdad that the Iraqis had presented documents but they would have to be studied before inspectors could determine their value. He declined to say how many were handed over or specify their subject matter. No Iraqi officials spoke with reporters afterward.

The two days of Baghdad talks will shape the reports the chief inspectors must present next Friday to the U.N. Security Council, whose member nations are searching for unanimity on the next step in the explosive crisis.

What appears to br a council majority wants something short of a U.N. authorization for war against Iraq, sought by President Bush and British Prime Minister Tony Blair.

Washington and London contend that Iraq retains chemical, biological and nuclear weapons programs prohibited by U.N. resolutions, and threaten a military strike if not satisfied Saddam has disarmed.

In a jab at major U.S. allies, Defense Secretary Donald Rumsfeld said Saturday countries such as France and Germany that favor giving Iraq another chance to disarm are undermining what slim chance may exist to avoid war.

"There are those who counsel that we should delay preparations" for war against Iraq. "Ironically, that approach could well make war more likely, not less, because delaying preparations sends a signal of uncertainty," Rumsfeld said in Munich, Germany in the opening address at an international conference on security policy.

In response to Rumsfeld's remarks, German Foreign Minister Joschka Fischer made an impassioned plea for patience with Iraq and said the German public simply sees no justification for going to war.

"We must not accept the logic of a military campaign," Fischer said. "We must give the inspectors more time."

Sergei Ivanov, the Russian defense minister, told the conference the main focus should be on fighting international terrorism of all kinds.

In his prepared remarks, Ivanov did not refer to Iraq but echoed a theme often mentioned by Rumsfeld - that the biggest threat is terrorist groups getting their hands on weapons of mass destruction.

France believes that the main threat to the country and to Europe today is from al-Qaeda, not Saddam.

Rumsfeld left no doubt that Mr. Bush is prepared to act soon, regardless of what others may say.

As many as 20,000 anti-war protesters demonstrated peacefully Saturday while a massive force of 3,500 police protected the conference attended by Rumsfeld and the others.

China's president told Mr. Bush that the authority of the U.N. Security Council must be protected when the world is determining what to do about Iraq, the Communist Party newspaper said Saturday.

Mr. Bush tried anew on Saturday to persuade skeptical allies that Saddam Hussein must be confronted over weapons of mass destruction, saying the United Nations' credibility is at stake and the Iraqi leader is "dangerous to America and the world."

At the same time, he warned he would not wait long before proceeding against Iraq even without the world body's support, and said the Iraqi leader is wasting a last opportunity to come clean.

In Berlin, meanwhile, a weekly magazine reported Germany and France were working on a broad disarmament plan for Iraq designed to avoid war, including the deployment of U.N. soldiers throughout the country, reconnaissance flights and a tripling of the number of weapons inspectors.

The plan could be presented to the U.N. Security Council as a resolution, Der Spiegel said, though it was unclear how the two countries or the United Nations would win Saddam's approval for carrying it out.

Rumsfeld said he had heard of the proposal through press reports, but suggested inspections only work if a country cooperates.

American military units, meanwhile, continue to converge on the Persian Gulf region, more than 100,000 personnel thus far to back up the U.S. threat.

In Turkey, top civilian and military leaders agreed to let the United States send 38,000 troops to the country to open a northern front in any Iraq war, private television NTV reported.

Washington had asked to station 80,000 troops in Turkey, but in the face of strong public opposition to war Turkish leaders asked that the United States reduce the figure.

In the central Iraqi city of Tikrit, Saddam's hometown, thousands of soldiers and civilian militia members - women and older men among them - marched in a display of readiness for any U.S. attack, holding Kalashnikov assault rifles aloft, carrying outsized portraits of Saddam.

Against this talk of war and peace, the more than 100 U.N. inspectors went about their daily business in Iraq. Inspectors paid surprise visits to industrial sites and a technical institute, and a nuclear team surveyed parts of Baghdad with a vehicle monitoring for radiation.

In other developments Saturday: