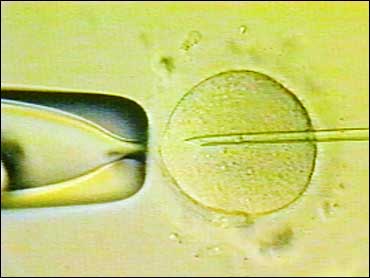 A blind woman is accusing a fertility clinic of discrimination, charging in a lawsuit that the clinic would not help her become a mother because of her disability.

The case is unique and a possible violation of the Americans with Disabilities Act, said fertility law expert Mark Rothstein.
"A doctor cannot refuse to do a procedure because a woman is blind or place new conditions on continuing treatments," said Rothstein, a professor at the University of Louisville Institute of Bioethics, Health and Law.

In her lawsuit, scheduled for trial Monday in federal court, Kijuana Chambers said the clinic performed three rounds of artificial insemination in 1999, then stopped when she refused to hire an occupational therapist to evaluate the safety of her home.

"We have not encountered or seen any other case like this, where a disability has deprived a woman of artificial insemination," said attorney Kevin Williams of the Colorado Cross-Disability Coalition. "The woman was told because she is blind, she can't be a parent."

A lawyer for the clinic says its concerns went beyond Chambers' blindness to her behavior and honesty.

Chambers, 33, who now lives in Iowa, found another clinic to do the procedure and gave birth to a daughter, Laurina, on Jan. 1, 2001.

Chambers said she was devastated by her last visit to the clinic.

"The doctor treated me like I wanted a new doll for Christmas," she said Friday. "I had spent two years thinking about this before I made the decision to have a child."

Rocky Mountain Women's Health Care Center lawyer Chris Miller said the case is not about Chambers' blindness but about allegedly untrue statements she made.

"When Ms. Chambers first was seen at the center over four years ago, she reported having a partner and support in helping care for a child," Miller said in a statement. "Over the next few months she demonstrated behaviors that caused concern about her ability to safely care for a child."

Miller said Chambers later acknowledged that she had no help to care for a child.

"As a result, the center believed ethically and morally that further treatment should be delayed until Ms. Chambers was able to provide assurances that she could safely care for a child alone," Miller said.

"A sighted person would not have been asked the same questions," said co-counsel Scott LaBarre.

The case is disturbing to Linda Yacks, a member of the American Council of the Blind of Colorado.

"Being blind doesn't mean you can not be a good mother," Yacks said. "I raised my two children and they have no problem with me watching their five children or being concerned for their safety."