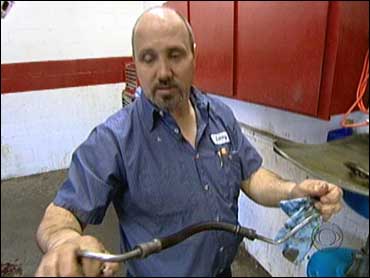 "I look with my hands," Woody says as he raises the car, locates a leaky power-steering line, wrestles it out, and puts in a new one — blind.

"I'm just a guy still doing what I like, who just can't see," he says.

Woody owns D&D Automotive in Cottage Grove, Ore. He says he's able to do his job mostly because you can't see a lot of the parts anyway.

Woody does have his limits, though, which is why he has another mechanic to do the test drives, the complicated jobs — and the jobs he probably shouldn't have started in the first place.

Only On The Web: Larry Woody shows off another of his talents — racing cars.

Woody hasn't always been blind. In fact, it happened just five years ago.

Woody was on the Interstate, on his way to work, when a lumber truck crossed the median and into the path of his little Toyota Celica. In addition to just about killing him, the crash severely damaged both of his eyes.

"You know they always say everything happens for a reason — and yeah, in so many ways I believe that," he says.

Woody says what leads him to that conclusion is a 17-year-old high school student named Otto Shima. Otto isn't blind — but he is deaf. And more important, he wants to be a mechanic.

So, a few months ago, with the help of an interpreter — Otto started interning with Woody. Somebody at the school district thought they'd be a good pair. Otto could see how disability doesn't matter, and Larry could see how much he still does.

And it's working. Otto says they have developed quite a bond.

"I do, I generally care for him. I really do," Woody says.

Of course, you don't have to be a blind man to see that.