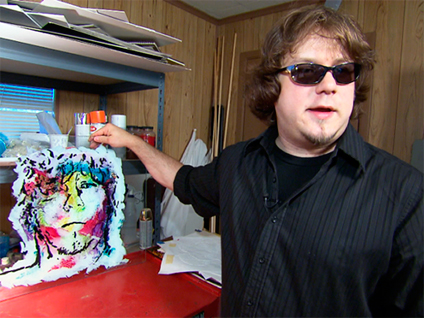 DALLAS - Henry David Thoreau once said "the world is but canvas to our imaginations." In tonight's "American Spirit," CBS News correspondent Don Teague shows us an artist who chose to speak through canvas when his world went dark.

If you ask John Bramblitt to describe the world, chances are he'll tell you it's colorful.

Bramblitt is an artist whose work is defined by bold and expressive use of color which has emotion all its own.

"Fear, it's a red with a lot of black mixed in," Bramblitt said. "It's almost like the color of blood and dirt or soil -it's really deep."

To submit an idea for The American Spirit send us an email.

He knows a lot about fear and anger and depression. Emotions that almost overwhelmed him nine years ago when at just age 30, complications from epilepsy left him irreversibly blind.

What color was the depression?

"Oh my word, it was the worst black. It was like being in a hole," Bramblitt said.

He eventually climbed out of that hole by learning to paint. He figured out how to mix the colors by feeling the different textures in the oils. He also learned how to apply paint by outlining an image and using his fingers to guide the brush strokes. He sees his subjects with only his fingertips.

"Yeah, you called it," Bramblitt replied.

To let Bramblitt touch your face is to allow him to imprint your image in his mind. His portraits are proof that his fingertips are every bit as perceptive as his eyes once were.

He has never seen his own wife or his young son, but it's clear he knows exactly what they look like.

Bramblitt's art is gaining notice in galleries around the country. You'll often find him in museums or at schools teaching his technique and what he's learned about life and color to children.

"The future is so open, and there's so many things I want to do," Bramblitt said. "It's brilliant, it's just the most brilliant colors and I can't wait to see it take form, to see it take shape."

This artist's vision is as bright as his art.