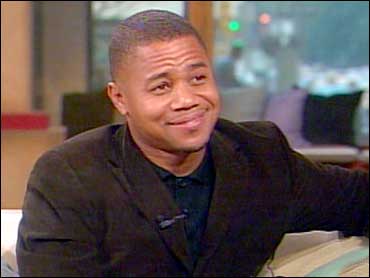 The new movie "Radio" tells the true story of a mentally challenged young man and the high school football coach who helps him inspire a small South Carolina town.

"I go to see this movie, and it starts with you with a shopping cart because that's what Radio used to do, is push the shopping cart around Anderson, S.C., and immediately, the tears are coming down my face."

The challenge for him, Gooding says, was being accurate in portraying a mentally disabled person.

"Especially with his handicap. He's very animated and he's very expressive emotionally and what not, so there was the fear of going too far," Gooding says. "It's more of a child-like innocence that I saw about him and I kind of hung on to that."

The film tells the story of coach Jones (Ed Harris) who befriends this young man, sort of beyond the comprehension of everybody in town. It's a relationship between men, father-son, and it's also racial. Off-screen, Gooding describes his working relationship with Harris as reassuring.

He says, "I had heard how intense he was. So it was kind of reassuring to know that I'd have a costar who took his job seriously. But I didn't know to what extent until I got on the set and he demands professionalism from everybody around him. I had the premium to do whatever I decided, whatever choice I made with the character, because he was very protective of me. And, you know, for a costar, that's like the one quality you need."

To play the part of Radio, Gooding says, was an honor.

"It's so funny," he says, "because the really challenging stuff, the stuff that you have fun creating is the easiest stuff to do, because you're always mentally motivated in every moment.

Radio has been cheering on the town of Anderson, S.C., for more than 40 years. In the early 1960s, the town's high school coaches befriended the extremely shy and inarticulate Kennedy. Now, Kennedy continues to raise school spirit — at the schools games and in classrooms.

Some Facts About Cuba Gooding Jr.