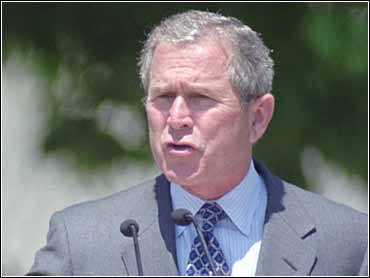 Republican presidential candidate George W. Bush, continuing to paint himself as a "compassionate conservative," unveiled a plan Tuesday to give adoptive parents a bigger tax break and states more money for child welfare.

"The goal is ... to reunite the child with the family, but if it's impossible foster care should be a bridge to adoption," Bush said in a panel discussion with foster care families and child welfare officials.

Bush said the current system has failed because too few foster children are moving to permanent homes, either back with their biological parents or with adoptive families.

"Foster care should be a temporary state," Bush said.

The Texas governor said his state is on the "leading edge" of streamlining the foster care and adoption systems. The number of children who are legally free to be adopted in Texas rose from 1,033 in 1996 to 2,123 in 1999 thanks to a speedier administrative process, he said.

He wants to give states $1 billion to beef up programs that assist families in which children are at risk of neglect or abuse. The aim is to prevent problems that lead to children being removed from their homes and placed in foster care, the Bush campaign said.

To encourage adoption of children for whom it's unsafe to return home, Bush will propose increasing tax credits from $5,000 to $7,500 for adoptive families, which would cost the government an additional $1 billion.

Bush also wants $300 million for young people who leave foster homes when they reach 18. They could use federal vouchers worth up to $5,000 to pay for college or vocational training.

A Gore campaign press release pointed out that "Last year, Texas was ranked as the second worst state in the nation in which to raise a child. It was ranked 29th when Bush became Governor. There are more children living in poverty in Texas than in 48 other states."

The new initiatives are part of Bush's three-week "compassionate conservative" tour during which he plans to unveil a series of social welfare proposals aimed at assisting low-income Americans.

More than 540,000 children are in foster care -- many removed from homes because of abuse and neglect. Some return to their parents, but one in four remain in foster care for three to five years. Some even stay as long as seven years, either because it's not safe for them to go home or because of poor case management.

Under Bush's plans, states would receive millions of new dollars for social workers and case managers who would more closely monitor troubled families with a history of neglect and abuse, said Bush spokesman Ari Fleischer. "We want to prevent situations from occurring," he said.

Bush's program would make finding a permanent home for kids a priority, whether that means with their biological parents or in an adoptive home, according to a program summary released by the Bush campaign.

"States should have the resources to help keep children with biological families if safe and appropriate or to place children with adoptive families," the campaign said.