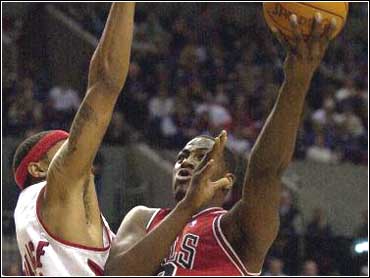 The Portland Trail Blazers might have felt slighted over the All-Star game selections, but they'll gladly take the NBA's best record in return.

Brian Grant scored 19 points as Portland moved past the Los Angeles Lakers for first place in the NBA overall standings with a sloppy 92-81 victory over the Chicago Bulls on Tuesday night.

Rasheed Wallace, who earlier in the day was selected to the All-Star team for the first time in his five-year career, added 14 points and nine rebounds for Portland.

"It surprised me just as much as the next person," Wallace said of being named a reserve on the Western Conference team. "For somebody (else), that is their dream, maybe, but that ain't no dream of mine. It wasn't one of my goals when I came into this league, honestly."

The last time the Blazers were all alone in first place in the Pacific Division was Dec. 7, when they were 15-4 and the Lakers 14-4. Two days later, Los Angeles pulled into a tie at 15-5 and held onto first until its recent slide.

Wallace became the first Blazers player to make the All-Star team since Clyde Drexler and Clifford Robinson in 1994.

"I was disappointed that we didn't get a couple of others on the team," Portland coach Mike Dunleavy said.

The Blazers, who have won six in a row overall and 10 straight at home, never trailed against the Bulls, but unleavy was constantly yelling at his team for giving up easy baskets and trying too many highlight-reel dunk attempts.

"It was terrible," Scottie Pippen said. "We came out and just played terrible. It's one of those games where we played like nobody wanted to be out there."

Elton Brand led the Bulls with 22 points and eight rebounds. Toni Kukoc added 12 points but shot just 2-of-10 after the first quarter.

Kukoc said he and the Bulls have been distracted by trade rumors that have him going to any number of teams, including Portland.

"It would be a great thing to play for a team like this," Kukoc told reporters, but added: "I pretty much know what's going to happen, but I'm not telling you right now."

The Blazers played without starting point guard Damon Stoudamire and center Arvydas Sabonis, who had minor injuries in practice.

Neither team seemed interested in playing much interior defense in the first half, as Portland gave up 15 offensive rebounds and 24 points in the paint. The Blazers, meanwhile, scored 36 inside points 16 on dunks.

A put-back by Brand ended an 8-0 run and cut the lead to 43-40 with 4:44 left in the first half, but the Bulls didn't hit a field goal for the next nine minutes, and Portland pushed the lead back to 12 three minutes into the third.

"We missed some good looks, some wide-open looks," Brand said. "To beat that team, we have to play close to perfect. We just can't miss those shots."