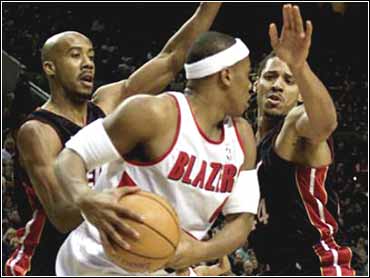 At the midway point of their season, many of the Portland Trail Blazers' veterans need a breather. Not the baby of the group, Bonzi Wells.

Wells scored 13 of his 22 points in a sensational first quarter, and Rasheed Wallace added 18 points as the Trail Blazers defeated the Miami Heat 85-74 on Thursday night.

"I just get out and run, just complement these guys well," said Wells, who has led the Blazers in scoring three straight games. Portland is 10-1 since the 24-year-old forward took over the starting shooting guard job from Steve Smith.

Overall, the Blazers have won 13 of 14 and lead the Western Conference with a 30-11 record. That's one game off the Blazers' mark at the same time last year, when they won 59 games.

"Everybody's getting into the mode. Everybody's playing hard," Wells said. "It's a great formula."

Wells made six of seven shots in the opening period. Five baskets were layups or dunks, as Portland raced to a 27-10 lead.

Eddie Jones had 20 points to lead Miami, which lost its fourth straight on the road. The Heat, last in the NBA in rebounding, were beaten 48-29 on the boards.

"They were one and done as far as shooting the ball," Blazers coach Mike Dunleavy said. "When we're defending and rebounding, we're tough to beat."

Wells had 10 rebounds and Stacey Augmon, starting for the injured Scottie Pippen, had eight.

Brian Grant, playing in Portland for the first time since the Blazers traded him to the Heat in a three-way deal last summer, was held to 11 points. He was called for traveling on Miami's first possession, and finished with just four rebounds against Portland centers Arvydas Sabonis and Dale Davis.

"We came out soft," Grant said. "You've got to be aggressive against a team like this. You can't get down 17 points and expect to beat this team. They're the best team in the NBA."

Grant, the most popular Blazer during his three seasons here, got the loudest cheers during pregame introductions.

"I very much appreciated that. I expected nothing negative, but I didn't expect that much," Grant said. "It was real nice coming back. I saw Paul Allen and his mother coming in. We said hello, we shook hands and talked a little bit. There were no ill feelings."

Portland settled into an offensive groove in the first quarter, stumbled in the second and regained the momentum for good in the third. The Blazers slowly built on a nine-point lead with inside baskets from Wallace, Sabonis and Augmon, then broke it open from the outside.

"I felt we were outclassed," Miami coach Pat Riley said. "Usually we play with a little bit more heart, but they took our heart from us tonight with their size and their talent."

The Blazers broke an 8-all tie with a 19-2 run that showed just how athletic they can be. Wells led the charge with 11 points, most of them on highlight-worthy plays. On one, he stole a pass from Tim Hardaway, made a difficult left-handed layup and got fouled. On another, he fed Wallace inside for an acrobatic two-handed reverse dunk.

Wells finished the period by following Wallace's miss with a slam that put the Blazers ahead by 17.

"He was strong and aggressive getting to the rim in transition," Dunleavy said. "Also, our guys did a good job finding him around the rim."

The Heat rallied behind Jones and Grant in the second, and Jones' 3-pointer cut the lead to 39-31. Wells got his first points of the period on a 21-foot jumper just before the horn to push the lead back to 10.