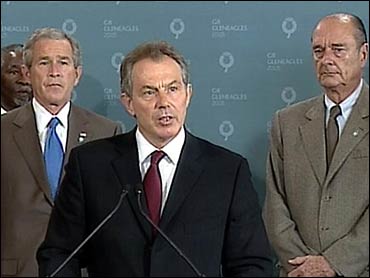 World leaders united in a show of solidarity to condemn Thursday's deadly bombings in London as an attack on all nations and vowed to defeat the terrorists responsible.

"We shall prevail and they shall not," declared the Group of Eight leaders and the heads of five developing nations meeting with them here. Their joint statement was read by British Prime Minister Tony Blair, flanked by his somber summit colleagues and visibly shaken by the wave of explosions that ripped through London's rush hour.

Blair returned to the G-8 summit Thursday evening after traveling to London to be briefed on the deadly wave of terrorist bombings that swept through the capital.

"We will not yield to these people," President Bush said minutes later.

Speaking at the summit, Russian President Vladimir Putin said the London attacks showed that the world was insufficiently united in the fight against terrorism.

Putin said Russia had suffered terror attacks in the past, and he expressed his country's condolences.

"But what happened today demonstrates yet again that we are doing too little to unite our efforts in the most effective way in the battle against terrorism," he said. He also called for an end to double standards -- an appeal he has made before to fellow world leaders, some of whom he has criticized for underestimating the terrorist ties of Chechen separatist rebels.

The leaders, already protected for their annual summit by extraordinary security measures that local authorities said remained sufficient, said the attacks would not halt their meeting focused on the issues of global warming and African poverty.

"We will not allow violence to change our societies or our values nor will we allow it to stop the work of this summit," Blair said on the leaders' behalf. "We will continue our deliberations in the interest of a better world."

But the impact of the explosions — which Blair said seemed designed to coincide with the meeting — was deeply felt at this exclusive golf resort about 450 miles from London.

G-8 leaders took a long break in their morning opening session so they could get individual briefings on developments and appear for the joint statement. Bush received frequent updates, and conferred briefly via secure video conference from his hotel suite with U.S. homeland security and national security advisers.

Blair rushed from the summit to return to London for briefings, carrying with him to the British people, Bush said, "a message of solidarity" from the rest of the world.

Blair planned to return to Gleneagles for the summit's final day of talks on Friday.

The attacks also overshadowed the continuing divide between Bush and Blair and the other leaders on how to tackle global warming.

There was no immediate word on who was responsible.

The joint statement was quickly agreed to by the leaders of the G-8 countries — United States, Britain, Canada, France, Germany, Italy, Japan and Russia — as well as the leaders of China, India, Brazil, Mexico and South Africa who met with them Thursday to discuss ways to combat global warming.

They noted that all their countries had suffered from the impact of terrorism.

"We are united in our resolve to confront and defeat this terrorism that is not an attack on one nation but on all nations and on civilized people everywhere," the statement said.

Said Bush: "The contrast couldn't be clearer between the intentions and the hearts of those of us who care deeply about human rights and human liberty, and those who kill, those who've got such evil in their heart that they will take the lives of innocent folks.

"The war on terror goes on," he added.

Many G-8 leaders had sharp disagreements with Bush and Blair over the U.S.-led war in Iraq. But they were united Thursday in condemning the London attacks and pledging intensified efforts to combat terrorism.

German Chancellor Gerhard Schroeder called the blasts "perfidious attacks" and said terrorism should be fought "with all the means at our disposal." French President Jacques Chirac said the attacks were "indescribable" and that "this scorn for human life is something we must fight with ever greater firmness."

Canadian Prime Minister Paul Martin expressed condolences to the victims of the blasts while Russian President Valdimir Putin said through spokesman Alexei Gromov that "no matter where such inhuman crimes occur — in London, New York, Moscow or other countries of the world — they demand unconditional condemnation."

The attacks came as Bush and Blair were meeting over breakfast and answering questions from reporters and before all the leaders were due to begin the summit's general session.

"It's particularly barbaric that this has happened on a day when people are meeting to try to help the problems of poverty in Africa, the long-term problems of climate change and the environment," Blair told reporters.

On climate change, Bush and Blair failed to bridge their differences.

Blair had sought commitments from the United States, along with the other countries, to set specific targets for reduction of carbon dioxide and other greenhouse gases blamed for global warming.

But Bush has refused, leading Blair to say after their meeting that "there is no point in going back over the Kyoto debate."

The United States is the only G-8 country that has refused to ratify the Kyoto agreement which mandates greenhouse gases reductions. The international treaty took effect in February.

"Now is the time to get beyond the Kyoto protocol and develop a strategy forward," Bush said.

Blair said he hoped to get back on a path to consensus by the time Kyoto expires in 2012.

The meeting began Wednesday with a formal dinner hosted by Britain's Queen Elizabeth.

Hoping to avoid a repeat of protest violence that broke out on the opening day, police — many in riot gear — placed a "safety cordon" Thursday around a camp several miles from Gleneagles that houses some 5,000 activists. Police blocked the main entrance to the camp and urged protesters to stay inside.