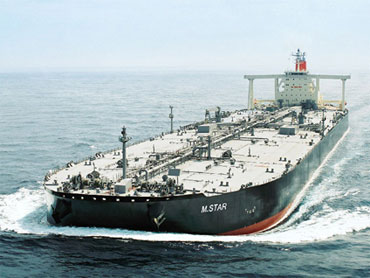 An explosion, possibly caused by an attack, damaged an oil tanker Wednesday near the mouth of the Persian Gulf, Japanese shipping company Mitsui O.S.K. Lines said.

The company said the blast on its tanker M. Star caused one minor injury but did not cause an oil leak.

The ship was damaged due to "an explosion from a suspected attack from the outside" in the waters off Oman, near the strategically important Strait of Hormuz, the company said.

The strait leads into the Persian Gulf past Oman and Iran, and is a transit point for about 40 percent of oil shipped by tankers worldwide.

"We believe it's highly likely an attack," Mitsui spokeswoman Eiko Mizuno said. "There is nothing that can explode in that part of the vessel."

She said a crew member noticed a flash of light right before the explosion, raising the possibility of an attack.

Yuki Shimoda, an official at Japan's Ministry of Land, Infrastructure, Transport and Tourism said the ministry was not immediately suspecting an attack, but added that the possibility cannot be ruled out.

The ministry said in a statement the tanker was carrying 270,000 tons of oil, and was heading toward Japan's Chiba Port near Tokyo from Das island in the United Arab Emirate. It said the tanker is registered in the Marshall Islands.

No Japanese vessels have suffered pirate attacks in the area, the ministry said.

"We've heard about it. We're still in the process of trying to get details," said Commander Amy Derrick-Frost.