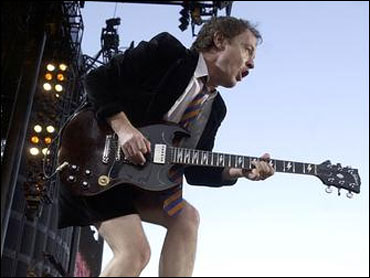 Blaring from a speaker behind a metal grate in his tiny cell in Iraq, the blistering rock from Nine Inch Nails hit Prisoner No. 200343 like a sonic bludgeon.

"Stains like the blood on your teeth," Trent Reznor snarled over distorted guitars. "Bite. Chew."

The auditory assault went on for days, then weeks, then months at the U.S. military detention center in Iraq. Twenty hours a day. AC/DC. Queen. Pantera. The prisoner, military contractor Donald Vance of Chicago, told The Associated Press he was soon suicidal.

The tactic has been common in the U.S. war on terror, with forces systematically using loud music on hundreds of detainees in Iraq, Afghanistan and Guantanamo Bay. Lt. Gen. Ricardo Sanchez, then the U.S. military commander in Iraq, authorized it on Sept. 14, 2003, "to create fear, disorient ... and prolong capture shock."

Now the detainees aren't the only ones complaining. Musicians are banding together to demand the U.S. military stop using their songs as weapons.

A campaign being launched Wednesday has brought together groups including Massive Attack and musicians such as Tom Morello, who played with Rage Against the Machine and Audioslave and is now on a solo tour. It will feature minutes of silence during concerts and festivals, said Chloe Davies of the British law group Reprieve, which represents dozens of Guantanamo Bay detainees and is organizing the campaign.

At least Vance, who says he was jailed for reporting illegal arms sales, was used to rock music. For many detainees who grew up in Afghanistan - where music was prohibited under Taliban rule - interrogations by U.S. forces marked their first exposure to the pounding rhythms, played at top volume.

The experience was overwhelming for many. Binyam Mohammed, now a prisoner at Guantanamo Bay, said men held with him at the CIA's "Dark Prison" in Afghanistan wound up screaming and smashing their heads against walls, unable to endure more.

"There was loud music, (Eminem's) 'Slim Shady' and Dr. Dre for 20 days. I heard this nonstop over and over," he told his lawyer, Clive Stafford Smith. "The CIA worked on people, including me, day and night for the months before I left. Plenty lost their minds."

Rear Adm. David Thomas, the commander of Guantanamo's detention center, said the music treatment is not currently used at Guantanamo but added that he could not rule out its use in the future.

The spokeswoman for Guantanamo's detention center, Navy Cmdr. Pauline Storum, wouldn't give details of when and how music has been used at the prison.

FBI agents stationed at Guantanamo Bay reported numerous instances in which music was blasted at detainees, saying they were "told such tactics were common there."

According to an FBI memo, one interrogator at Guantanamo Bay bragged he needed only four days to "break" someone by alternating 16 hours of music and lights with four hours of silence and darkness.

Ruhal Ahmed, a Briton who was captured in Afghanistan, describes excruciating sessions at Guantanamo Bay. He said his hands were shackled to his feet, which were shackled to the floor, forcing him into a painful squat for periods of up to two days.

"You're in agony," Ahmed, who was released without charge in 2004, told Reprieve. He said the agony was compounded when music was introduced, because "before you could actually concentrate on something else, try to make yourself focus on some other things in your life that you did before and take that pain away.

"It makes you feel like you are going mad," he said.

Not all of the music is hard rock. Christopher Cerf, who wrote music for "Sesame Street," said he was horrified to learn songs from the children's TV show were used in interrogations.

"I wouldn't want my music to be a party to that," he told AP.

Bob Singleton, whose song "I Love You" is beloved by legions of preschool Barney fans, wrote in a newspaper opinion column that any music can become unbearable if played loudly for long stretches.

"It's absolutely ludicrous," he wrote in the Los Angeles Times. "A song that was designed to make little children feel safe and loved was somehow going to threaten the mental state of adults and drive them to the emotional breaking point?"

Morello, of Rage Against the Machine, has been especially forceful in denouncing the practice. During a recent concert in San Francisco, he proposed taking revenge on President George W. Bush.

"I suggest that they level Guantanamo Bay, but they keep one small cell and they put Bush in there ... and they blast some Rage Against the Machine," he said to whoops and cheers.

Some musicians, however, say they're proud that their music is used in interrogations. Those include bassist Stevie Benton, whose group Drowning Pool has performed in Iraq and recorded one of the interrogators' favorites, "Bodies."

"People assume we should be offended that somebody in the military thinks our song is annoying enough that played over and over it can psychologically break someone down," he told Spin magazine. "I take it as an honor to think that perhaps our song could be used to quell another 9/11 attack or something like that."

The band's record label told AP that Benton did not want to comment further. Instead, the band issued a statement reading: "Drowning Pool is committed to supporting the lives and rights of our troops stationed around the world."

Vance, in a telephone interview from Chicago, said the tactic can make innocent men go mad. According to a lawsuit he has filed, his jailers said he was being held because his employer was suspected of selling weapons to terrorists and insurgents. The U.S. military confirms Vance was jailed but won't elaborate because of the lawsuit.

He said he was locked in an overcooled 9-foot-by-9-foot cell that had a speaker with a metal grate over it. Two large speakers stood in the hallway outside. The music was almost constant, mostly hard rock, he said.

"There was a lot of Nine Inch Nails, including 'March of the Pigs,"' he said. "I couldn't tell you how many times I heard Queen's 'We Will Rock You."'

He wore only a jumpsuit and flip-flops and had no protection from the cold.

"I had no blanket or sheet. If I had, I would probably have tried suicide," he said. "I got to a few points toward the end where I thought, `How can I do this?' Actively plotting, `How can I get away with it so they don't stop it?"'

Asked to describe the experience, Vance said: "It sort of removes you from you. You can no longer formulate your own thoughts when you're in an environment like that."

He was released after 97 days. Two years later, he says, "I keep my home very quiet."