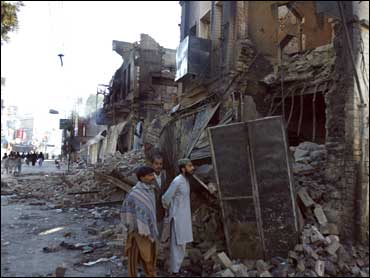 An Islamic militant group said Saturday it had no link to Benazir Bhutto's killing, dismissing government claims that its leader orchestrated the assassination.

Bhutto's aides also said they doubted militant commander Baitullah Mehsud was behind the attack on the opposition leader and accused the government of a cover-up.

As Bhutto's supporters rampaged across the country, Pakistan's election commission called an emergency meeting for Monday to discuss the violence's impact on Jan. 8 parliamentary elections.

Nine election offices in Bhutto's southern Sindh province were burned to the ground, along with voter rolls and ballot boxes, the commission said in a statement. The violence also hampered the printing of ballot papers, training of poll workers and other pre-election logistics, the statement said.

The U.S. government, which sees nuclear-armed Pakistan as a crucial ally in the war on terror, has pushed President Pervez Musharraf to keep the election on track to promote stability, moderation and democracy in Pakistan, U.S. officials said.

Prime Minister Mohammedmian Soomro said Friday the government had no immediate plans to postpone the election, despite the violence and the decision by Nawaz Sharif, another opposition leader, to boycott the poll.

Bhutto's Pakistan Peoples Party also called a meeting Sunday to decide whether to participate in the vote.

On Saturday, roads across Bhutto's southern Sindh province were littered with burning vehicles, smoking reminders of the continuing chaos since her assassination Thursday. Factories, stores and restaurants were set ablaze in Pakistan's biggest city, Karachi, where 17 people have been killed and dozens injured, officials said.

The government blamed Bhutto's killing on al Qaeda and Taliban militants operating with increasing impunity in the lawless tribal areas along the border with Afghanistan. It released a transcript Friday of a purported conversation between Mehsud and another militant, apparently discussing the assassination.

"It was a spectacular job. They were very brave boys who killed her," Mehsud said, according to the transcript.

Interior Ministry spokesman Javed Iqbal Cheema described Mehsud as an al Qaeda leader who was also behind the Karachi bomb blast in October against Bhutto that killed more than 140 people.

But the government's revelations raise more questions than they answer, reports CBS News correspondent Sheila MacVicar. If they could record this conversation, why were they unable to reach the suspects in time to stop the attack?

A spokesman for Mehsud, Maulana Mohammed Umer, denied the militant was involved in the attack and dismissed the allegations as "government propaganda."

"We strongly deny it. Baitullah Mehsud is not involved in the killing of Benazir Bhutto," he said in a telephone call he made to The Associated Press from the tribal region of South Waziristan.

"The fact is that we are only against America, and we don't consider political leaders of Pakistan our enemy," he said, adding that he was speaking on instructions from Mehsud.

Mehsud heads Tehrik-i-Taliban, a newly formed coalition of Islamic militants committed to waging holy war against the government, which is a key U.S. ally in its war on terror.

Bhutto's Pakistan Peoples Party accused the government of trying to frame Mehsud, saying the militant - through emissaries - had previously told Bhutto he was not involved in the Karachi bombing.

"The story that al Qaeda or Baitullah Mehsud did it appears to us to be a planted story, an incorrect story, because they want to divert the attention," said Farhatullah Babar, a spokesman for Bhutto's party.

After the Karachi attack, Bhutto accused elements in the ruling pro-Musharraf party of plotting to kill her. The government denied the claims. Babar said Bhutto's allegations were never investigated.

Bhutto was killed Thursday evening when a suicide attacker shot at her and then blew himself up as she left a rally in the garrison city of Rawalpindi near Islamabad. The attack killed about 20 others as well. Authorities initially said she died from bullet wounds, and a surgeon who treated her said the impact from shrapnel on her skull killed her.

But Cheema said she was killed when she tried to duck back into the armored vehicle during the attack, and the shock waves from the blast smashed her head into a lever attached to the sunroof, fracturing her skull, he said.

The government said it was forming two inquiries into Bhutto's death, one to be carried out by a high court judge and another by security forces.

On Saturday, about half a dozen police investigators were still sifting through evidence and taking measurements at the scene of the attack. More than a dozen officers diverted traffic and provided security for the investigators.

Mobs continued to wreak havoc across the country for a third day. Business centers, gas stations and schools were closed and many roads were deserted.

Rioters in Karachi set fire to three factories, a restaurant, two shops and several vehicles, said Ehtisham Uddin, a local fire official. Doctors at hospitals in the city said 26 people were wounded overnight by gunshots, many of them fired by protesters.

Attackers opened fire at a motorcade of Bhutto's supporters as they headed back to Karachi after her funeral, killing one man and wounding two others, said Waqar Mehdi, a spokesman for Bhutto's party.

Thousands of Bhutto supporters spilled onto the streets after a prayer ceremony for her in Rawalpindi, throwing stones and smashing windows.

Burned out vehicles littered the road from Larkana to Karachi, and hundreds of people tried to hitch rides along the route. Protesters burned tires, and markets were deserted.

Train service in parts of the south were suspended because "of the bad law and order situation," a rail official said, speaking on condition of anonymity because he was not authorized to speak to the media.