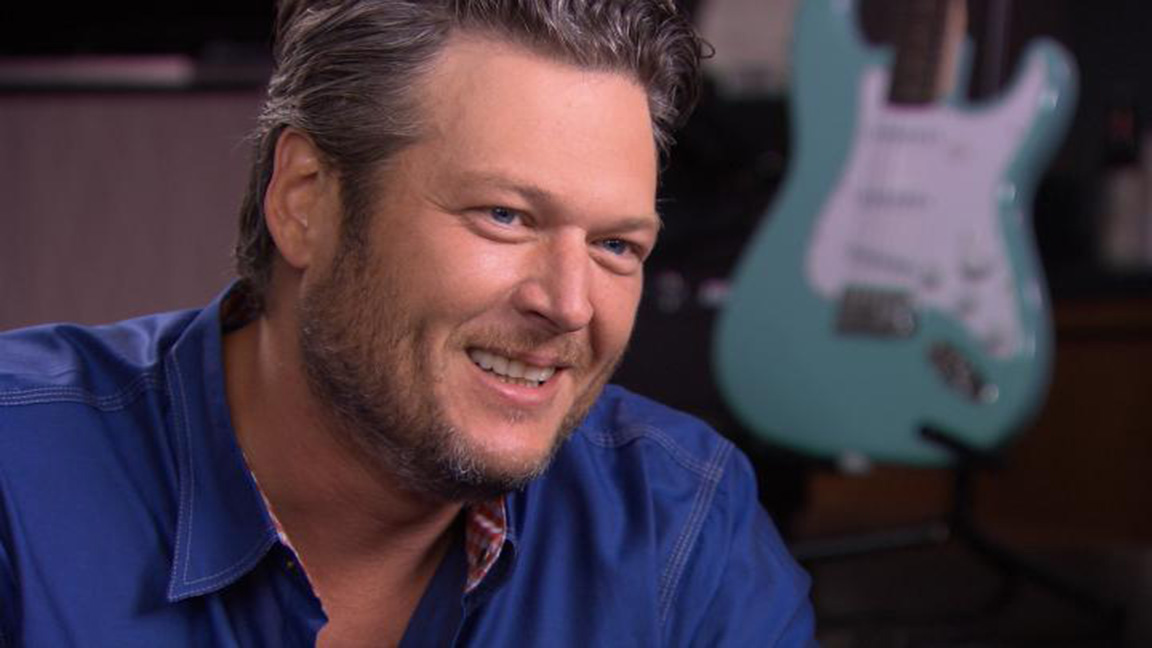 The following is a script of "Blake Shelton" which aired on Nov. 2, 2014. Norah O'Donnell is the correspondent. John Hamlin, producer.

Blake Shelton has one of the top country albums in America and a grin that won't go away. He's country music's most recognizable star and that's saying something, since 80 million Americans listen to country music every week. Songs about hook ups, pickup trucks and solo cups. And that's just fine with the 38-year-old Shelton, who grew up in Oklahoma, wears jeans and alligator-skin boots everyday and as you'll see, has enough personality to fill out his six-foot-five country-boy frame.

Norah O'Donnell: What is it about country that's so popular?

Norah O'Donnell: What about the criticism that country music, a lot of it sounds the same?

Blake Shelton: Gosh dang, man, I hear about it all the time. You know, "It's the same subject matter over and over again," and, "All y'all sing about is, you know, pretty girls."

Norah O'Donnell: ...about drinking too.

Blake Shelton: And I like drinking. And I like singing about it. So get over it. That's my take on it.

On tour in Little Rock last summer, Blake Shelton's point of view was on full display. His concerts across the country are filled with people who see things the way he does. Seats at Shelton's shows are usually holding more beers than behinds. His audience prefers stand-up-sing-alongs.

Blake Shelton: You can't tell me that doesn't speak to your soul. And...

Blake Shelton: See, you almost tear up when you say that. It's because it's striking a nerve. It's just fun. I don't know how you let loose and just have fun if you're having to think too hard about it. And then when it's time to be serious, I have songs that'll take you down there. Some will take you too far down. It hurts for me to even listen to some of my own songs sometimes. But when I want to have fun and not think about it, I want to sing, you know, "Chew tobacco, spit."

Shelton comes by his country credentials naturally. He was raised in Ada, Oklahoma, a town of less than 20,000, an hour-and-a-half from the nearest big city.

Blake Shelton: So that was the drive through town.

His father sold cars here and his mom ran a beauty parlor. He started singing to the radio as early as he can remember.

Blake Shelton: Any time Mom walked by my bedroom, it was like, "What in the hell is he doing in there? It's loud," you know, "Turn it down."

Norah O'Donnell: And she had you performing at beauty pageants...

Blake Shelton: She knew she had a kid that she wanted to get on stage and she put me in the damn pageant and let me, "They have a talent part. He can sing in there," you know?

Blake Shelton: Oh, God, yes. Mostly all girls. I mean, because what boy from Ada, Oklahoma would want to be in the Miss Valentine Pageant, right?

But there was a lesson he learned on stage at an early age that Shelton believes is central to his success.

Blake Shelton: I learned that it was more to it than just coming up here and singing a song and walking off. I knew I wasn't a good enough singer for that just to be the thing. You got to perform but you also got to entertain. You got to make people laugh. You got to tell a joke or a story. Make the most of the time that you're out here so that people remember you when you walk away.

Blake grew up the youngest of three Shelton children. Older sister, Endy, and brother, Richie, who Blake remembers looking up to for all the usual big brother reasons.

Blake Shelton: His bedroom was right across the hallway from mine when I was little. And he was listening to Hank Williams, Jr. or Waylon, Lynyrd Skynyrd or Bob Seeger. I just, whatever was popular really, Richie loved all music. And I would be sitting there going, "Man, that guy's my hero. That's the coolest guy. He's my big brother."

But the music stopped when Blake was just 14 years old. Richie Shelton was killed in a car accident.

Norah O'Donnell: How did you deal with the grief?

Blake Shelton: I don't know, you know? I remember picking up the phone to call him a week after he was dead, to tell him something. And it was like, you think about what I, you know, I was picking up the phone to call him, to tell him something I just saw on TV or, and it was like constantly a shock to me that he was dead. It was just...

Norah O'Donnell: You don't ever get over it?

Blake Shelton: No, that's what my dad told me, too. He said, "Look, you will never, ever get over this happening. You're just going to have to learn to get used to it." He was absolutely right.

He wrote about the loss, even acknowledging his dad's warning,

[Blake Shelton: They say I'll be OK but I'm not going to ever get over you...]

Blake Shelton's childhood wasn't easy. His parents were divorced and for a time, he lived with his dad in this apartment. They lived simply and very country.

Blake Shelton: I went fishing or hunting every day after school. And whatever I had ended up on that porch. We were bachelors. We had a lot of chicken chow mein.

Blake Shelton: In that house and deer chili.

Norah O'Donnell: Did you make the deer chili?

Blake Shelton: Oh God, yeah. All that dead stuff I dragged up on that porch, we ate it.

Two weeks after barely graduating from high school, Blake left for Nashville. Five years later, he had a record deal and in 2001, landed his first big hit.

But having staying power in Nashville is about as easy as making it in L.A. as an actor. And Shelton was known as much for his hairstyle as he was for his musical chops. But his career and his life changed in 2005 when he was asked to perform on this TV special with an up-and-coming singer from Texas named Miranda Lambert.

Norah O'Donnell: A lot of people who were there say they saw you falling in love at that moment.

Blake Shelton: I guess so.

Norah O'Donnell: And when you look back at it, you think?

Blake Shelton: I mean, I guess so. It's hard to argue with what I'm looking at. I'm trying to play the guy card here like, 'By God, no' but I mean, that's pretty pathetic right there.

Norah O'Donnell: But you were married at the time.

Blake Shelton: I was married. That was easily the toughest thing that I've, you know, been through. I put my divorce up there with my brother's death and that was a tough, tough call to make.

And started to string together hit after hit.

And in 2011, was approached about a new music competition show called "The Voice." Turns out the boy with the "aw shucks I am from Ada, Oklahoma" personality was about to go Hollywood.

Blake Shelton: I have absolutely no problem with making an ass out of myself.

Actually, he's made a name for himself. When it started Shelton was probably the show's least known star, but today, he's known as the unpredictable judge with the quickest wit.

[Blake Shelton: Well that's a good point. And I'm glad that you took this opportunity.]

[Adam Levine: Why don't you hush up.]

And the deepest drink, usually vodka.

Blake Shelton: I better be.

Because of his TV schedule, Shelton performs less than other country stars, even though the demand for him is huge.

He hosts the Academy of Country Music Awards and holds a unique country music record: 12 consecutive number one singles, so far.

Norah O'Donnell: You don't write too many of your songs.

Blake Shelton: I don't. If I've written 200 songs in my life or 300 songs, I probably have 15 of those that I'm proud of. That I truly go, man, I did something there. And I can't imagine me convincing myself that I'm a better songwriter than some of these people in Nashville. I just want the song to be the best song it can possibly be.

His other priority is getting home as often as possible. When his TV shows or concerts wrap, he heads immediately to the nearest private airport.

Blake Shelton: I am leaving Hollywood. Thank you, God.

To get back home to Oklahoma, close to where he used to hunt and fish with his dad. He lives with his wife Miranda Lambert on a 1,200-acre ranch. They say it's their last private place and we weren't invited in. When we drove around town with Shelton he was proud to show us the shop where he gets his boots re-soled. And that he still knows his neighbors

But no matter if we were in Oklahoma, L.A. or Manhattan, the country boy and the country star seemed to be the same person: polite, funny and completely comfortable in those cowboy boots.