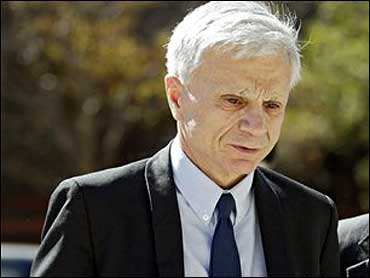 In a pre-emptive maneuver, the prosecutor in the Robert Blake murder case warned prospective jurors they would hear that the actor's slain wife was "not Mother Teresa" and that some people may have thought she deserved to be killed.

Prosecutor Shellie Samuels repeatedly asked the potential jurors Tuesday if they could convict Blake even if they wind up disliking Bonny Lee Bakley.

"If you really thought she was a scuzz, could you still convict him of killing her?" she asked one man.

"If the facts showed he killed her, I could," said the man, who was retained for the jury pool.

To another prospective juror, Samuels declared: "There will be evidence in this case that Bonny Bakley was not Mother Teresa. She had quite a bit of baggage, an unsavory person, she was scummy."

By day's end, the pool of prospective jurors had risen to 23. Dozens are expected to be added before lawyers begin using peremptory challenges to select the final jury.

Blake, 71, is charged with murder in the 2001 slaying of Bakley, who was shot in a car outside a restaurant where they had dined. Prosecutors have suggested Blake wanted out of the marriage; he married her after she gave birth to his daughter.

He could get life in prison. Prosecutors are not seeking the death penalty.

Samuels also told the prospective jurors that she will be presenting only circumstantial evidence. She said there were no fingerprints, no DNA and no eyewitnesses.

Prospective jurors were asked Monday if they could endure the public scrutiny that surrounded jurors in the O.J. Simpson and Scott Peterson cases, and the answers were mixed.

"I would rather not be a juror," said one woman. "I would prefer not to be in the limelight. But whatever happens will happen. I could be unprejudiced."

A young woman confronted with the same question was unfazed.

"I am not easily influenced by the media," she said.

"How would you feel about somebody writing about you as a juror?" asked defense attorney M. Gerald Schwartzbach.

More than 1,000 prospective jurors were initially summoned for the case and more than 700 were dismissed for hardship reasons before individual questioning by lawyers began Monday.

It was Schwartzbach who raised concerns about media attention in the case.

Simpson was acquitted in 1995 of charges that he murdered ex-wife Nicole Brown Simpson and her friend Ronald Goldman. Peterson, of Modesto, was convicted last week of murdering his pregnant wife, Laci, and her fetus.

But Schwartzbach's efforts to get prospective jurors to say what they thought of reactions to those verdicts were met with shrugs.

"I guess people cheered the Scott Peterson verdict because they felt strongly he was guilty," said one woman. But she said she had no opinion because she hadn't followed that case closely.

On the other hand, she said she did follow the Simpson case and thought he was guilty.

The prosecutor, Deputy District Attorney Shellie Samuels, asked the prospects what they would do if they concluded that Blake had killed his wife but had done it to protect his infant daughter.

The prospects said they would still convict him.

"Do you feel there should be a law to protect people who kill their spouses to protect their children?" the prosecutor asked one woman.

"We sure would have a lot of dead spouses, wouldn't we?" quipped Samuels.

Samuels also raised the prospect that some jurors may not like what they find out about the victim. Bakley has been depicted as a con-artist who solicited money from men with promises of sex.

"If you are convinced by the end of this case that he murdered Bonny Lee Bakley but she probably deserved it, could you convict him?" asked Samuels.

Prosecutors have said they will present evidence that Blake wanted Bakley to abort the baby.

The jury selection process is expected to last a few more weeks.

Defense attorneys for Blake are reportedly looking for jurors who may be open to conspiracy theories. Prosecutors, on the other hand, want people who use common sense and make quick decisions.

More than three years after Blake's wife was shot to death, the selection process for more than 100 potential jurors began today in the actor's murder trial.

Jury consultant Richard Gabriel, president of Decision Analysis, said the defense would be looking for people who are "sensational minded."

Loyola University law professor Laurie Levenson said the ideal defense jurors would be people who "love a good whodunit and want to find their own solutions."

On the prosecution side, Gabriel, who is not working on the case, said: "They are looking for quick decision makers, conservative people who will use common sense."

The trial is estimated to last about five months.