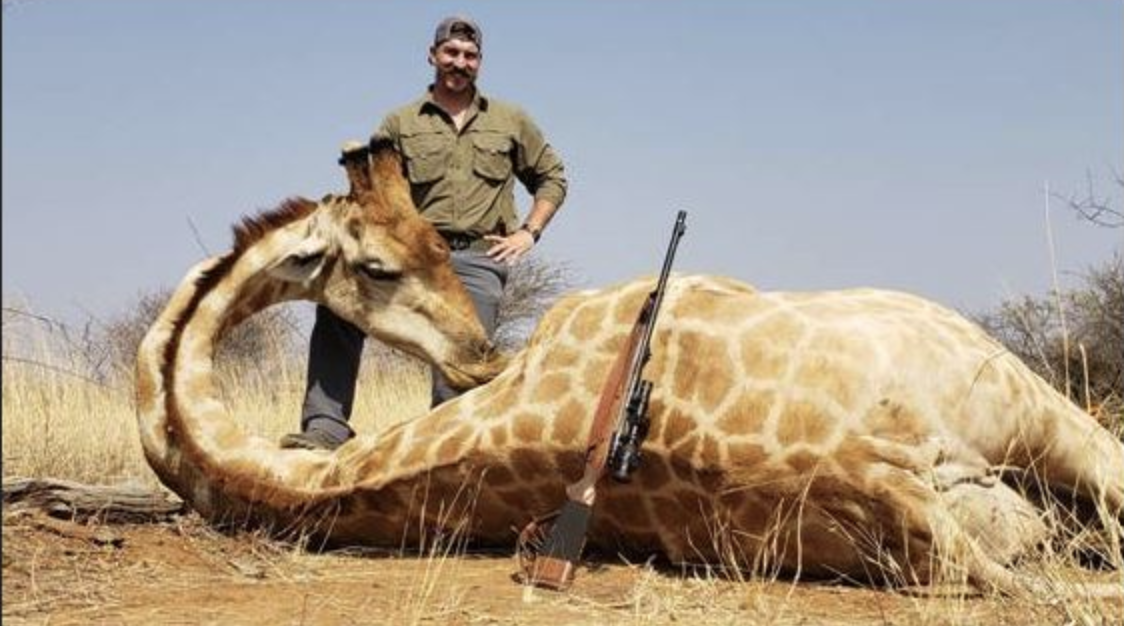 An Idaho Fish and Game commissioner has resigned after coming under fire for photos of a family of baboons and other animals he shot and killed on a hunting trip in Africa. Governor C. L. "Butch" Otter issued a statement Monday afternoon saying he had asked for and received Blake Fisher's resignation. A group of former commissioners first called for Fisher to resign, CBS Boise affiliate KBOI reported.

Fischer emailed friends and co-workers photos of himself posing with a dead baboon family – including a baby – as well as a giraffe, a leopard, and other animals he killed on a recent trip to Namibia. Fischer went on a two-week trip to the African country with his wife. "First day she wanted to watch me, and 'get a feel' of Africa," Fischer said in the email. "So I shot a whole family of baboons."

Fischer's emails, obtained by KBOI through Governor Butch Otter's office, include photos of a giraffe, leopard, impala, antelope and waterbuck Fischer killed. Fischer described his kills in emails that went to about 125 people. "I shot a Leopard," he wrote. "Super cool, super lucky. The Leopard is one of the big 5, as in one of the 5 animals in Africa that will kill you before you can kill it. Crazy cool animal. They are normally super nocturnal, so this was really unique."

The photos received swift backlash and were reported to the governor's office. The Idaho Statesman newspaper, which first reported the story Friday, obtained an email from former commissioner Fred Trevey urging Fischer to resign.

"My reaction to the photo and accompanying text of you smiling and holding a 'family' of primates you killed, dismays and disappoints me," Trevey said, according to KBOI. "I have a difficult time understanding how a person privileged to be an Idaho Fish and Game Commissioner can view such an action as sportsmanlike and an example to others."

Former commissioner Tony McDermott also sent an email to the governor's office, saying he and six other former commissioners agree with "Trevey's approach to this potentially explosive issue," according to the Statesman.

Governor Otter said in a statement Monday, "Every member of my administration is expected to exercise good judgment. Commissioner Fischer did not. Accordingly, I have accepted his resignation from the Idaho Fish and Game Commission."

The governor's office also released a copy of Fischer's resignation letter, which read in part: "I recently made some poor judgments that resulted in sharing photos of a hunt which did not display an appropriate level of sportsmanship and respect for the animals I harvested. While these actions were out of character for me, I fully accept responsibility. ... I apologize to the hunters and anglers of Idaho who I was appointed to represent."

CBS News has reached out to Bill Fischer, Fred Trevey, and Idaho Fish and Game with requests for comment.

Steve Alder, executive director of Idaho For Wildlife, a pro-hunting group, told KBOI that Fischer's hunts were despicable. "What bothers me is he's got the family there and a little baby baboon sitting there with blood all over it, kind of like in the mother's arms," Alder said. "You just don't do this. It's just not something. We don't want to put out to the public and many of us wouldn't even do this in the first place."