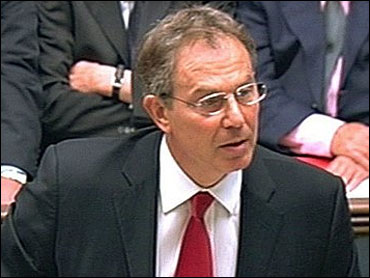 Prime Minister Tony Blair on Monday condemned last week's terrorist attacks in London as a "murderous carnage of the innocent" and said the evidence pointed to Islamic extremists. He promised a "vigorous and intense" manhunt to bring the attackers to justice.

Addressing British lawmakers for the first time since Thursday's subway and bus bombings, Blair said no specific intelligence was available that might have helped authorities thwart the attacks, answering critics who have questioned the government's vigilance and readiness.

"Our country will not be defeated by such terror," he told the House of Commons. "We will pursue those responsible wherever they are and will not rest until they are identified and ... brought to justice."

Blair's remarks came as police raised the death toll from the attacks to 52, and as Londoners streamed back to their jobs Monday morning at the start of the first full work week since the bombings.

Many travelers said they would defy the attackers by using public transportation as normal, but some were too afraid and took taxis instead.

"I ... will not let the attacks put me off," said computer consultant Paul Williams, 42, as he prepared to board an underground train in central London. "As far as I am concerned, it is just a normal day at work."

But Ted Wright, chairman of the British Poultry Council, hailed a taxi instead. "In light of what has happened, I have decided to take a taxi. It will probably cost an extra six pounds ($10.70), but should hopefully put my wife's mind at rest," he said.

Mayor Ken Livingstone took the subway to work to send the message that Londoners should "carry on."

"We are going to work. We carry on our lives," he said. "We don't let a small group of terrorists change the way we live."

Transit officials said the number of passengers using the system was back to normal Monday. However, a few sections of the underground rail system affected by the attacks remained closed, and the number of shoppers in central London has fallen by about 25 percent since the attacks, the British media reported.

Scotland Yard said Monday it had identified the first of the victims — Susan Levy, 53, of Hertfordshire, outside London. CBS News Correspondent Allen Pizzey reports it may take weeks to identify them all. Among them are people from across the religious and ethnic spectrum, including several Americans.

Underscoring how tense London remained, police closed several streets where most government offices are located – including Parliament, the Foreign Office, and 10 Downing St., where the prime minister lives and works – for about a half-hour Monday after a suspicious package was found. It contained no explosives.

Police on Monday raised the death toll from the three blasts on subway cars and one on a double-decker bus to 52 from 49. Workers are still pulling bodies from a mangled subway train deep beneath the streets of London, four days after the attacks.

At least 700 people were injured in the bombings.

Police said three men – all Britons – arriving at Heathrow airport were arrested early Sunday, but immediately dismissed speculation of their having a break in the investigation. The three were released late Sunday night.

British intelligence officials met in London over the weekend with their counterparts from the United States and about two-dozen other countries to discuss possible leads in bombings.

A man with British and Moroccan nationality mentioned as a possible suspect told The Guardian newspaper in an interview published Monday that he had nothing to do with the blasts.

"Over 30 years I have lived in Britain, I have never been involved in violence or crime," said Mohamed Guerbouzi, who was convicted in absentia in Morocco in 2003 and sentenced to 20 years in prison in connection with the Casablanca terrorist bombings.

Police remain silent on details on their investigation but reports in London newspapers Sunday identified a possible suspect as Mustafa Setmarian Nasar - a Syrian suspected of being al Qaeda's operations chief in Europe and the alleged mastermind of last year's Madrid railway bombings.

London police refused to comment but a U.S. official said both nations are trying to locate Nasar.

Also Monday, authorities in Lublin, Poland, searched the premises of a British citizen of Pakistani origin in connection with the London bombings. A spokeswoman for the Lublin office of the country's Internal Security Agency says the man, whose name was not released, was not taken into custody.

Sunday, Queen Elizabeth II led commemorations of the 60th anniversary of the end of World War II in Europe. Thursday's attacks were not forgotten, and in speeches, officials noted a determination that Britain had suffered worse and would survive its latest tragedy.

"We just wanted to show some sign of respect for these people and for those people whose bodies are still below," said one person, leaving a contribution to the still-growing makeshift memorial.

Elsewhere, leaders of Britain's Christians, Muslims and Jews urged conciliation, not revenge. They met "to proclaim our wish to resist any form of violence and to work for reconciliation and peace," Cardinal Cormac Murphy O'Connor said.

Yet there were some reports of violence toward mosques around Britain, including arson attacks on mosques in east London, Leeds, Telford and Birkenhead which resulted in minor damage. There were also reports of damage at two mosques in Bristol.