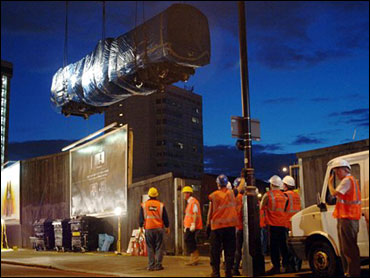 Prime Minister Tony Blair said Wednesday he was considering calling an international conference on how to eliminate Islamic extremism following the London suicide bombings, while a Pakistani intelligence official said authorities had arrested an "important" suspect in the attacks.

The proposed international conference, Blair said, would focus on the possibilities of taking "concerted action right across the world to try to root out this type extremist teaching," particularly in religious schools, known as madrassas.

Blair told the House of Commons he recently spoke with Pakistan President Gen. Pervez Musharraf and was satisfied there was a "real desire and willingness on the part of Pakistan's government to deal with madrassas preaching this kind of extremism."

He said 26 countries had been attacked by al Qaeda and associated groups, "so there is obviously a huge well of support and understanding for the problems that we have faced in this country just recently."

British Islamic leaders called for a judicial inquiry into what motivated the bombers.

"The scale of disenchantment amongst Muslim youth is very clear to see," said Inayat Bungalwala of the Muslim Council of Britain.

"Various factors are at play: underachievement in education; a high rate of unemployment; discrimination in the workplace; social exclusion, and also the government's own policies, especially in Iraq. The process of how we get four homegrown suicide bombers must be understood and that is why we are calling for an inquiry."

Home Secretary Charles Clarke told lawmakers that police identified all 56 people known to have died in the July 7 attacks on three Underground trains and a double-decker bus.

Speaking in the eastern city of Lahore, the Pakistani intelligence official declined to say when the man was arrested or elaborate on his alleged links to the London bombings. The official spoke on condition of anonymity because he is not authorized to speak to the media and because of the secretive nature of his job.

"We have an important man in our custody," the official said. "I am not in a position to disclose his name right now, but the maximum that I can tell you is that he has some direct links with the London attacks."

British detectives continued to hunt for the masterminds of the attacks that killed 56 people, but The Times newspaper reported Wednesday that authorities remain uncertain whether an organizer slipped out of Britain just before the blasts.

Police in London removed a shattered carriage from a subway station late Tuesday. The train carriage was removed from the Edgware Road station, one of two attack sites on the Circle Line around central London. The 20-ton car, shrouded in blue tarpaulins, was taken to a secure police facility for further investigation.

London Underground said it hopes to resume full service on the line by Aug. 2.

Key questions remain unanswered in the investigation, Metropolitan Police Commissioner Sir Ian Blair said Tuesday, including: "Who is the chemist? Who are the people who trained them? Who facilitated their trip to Pakistan?"

"Whoever is doing that is still out there," Ian Blair told a meeting of Christians, Muslims and Jews.

The Times quoted unidentified police sources as saying they believe a man visited London and the hometowns of the four suspected suicide bombers but left hours before the attacks.

However, it quoted unidentified security sources as saying they had ruled out one suspected organizer as a case of mistaken identity.

The Egyptian government said Tuesday that Magdy el-Nashar, a biochemist who taught at Leeds University and is wanted for questioning by Britain, had no links to the attacks or to al Qaeda. Leeds is the hometown of two men identified by police as suicide bombers.

Three of the London suspects — Hasib Hussain, 18, Mohammed Sidique Khan, 30, and Shahzad Tanweer, 22, all Britons of Pakistani descent — traveled to Karachi in southern Pakistan last year, and Pakistani security officials believe Tanweer spent a few days at a religious school in Lahore, where many militant groups have clandestine operations.

The Muslim leaders will be "able to talk to the Muslim community and confront this evil ideology, take it on and defeat it by the force of reason," the prime minister said.

Absent from the meeting was the radical Islamic firebrand Anjem Choudary.

The British government has heard enough of his views, spoken from the angry margins of the nations's immigrant Muslim community. The extremist group he led, Muhajiroun, had called for creating an Islamic state in Britain and praised suicide attacks in Israel and elsewhere; the group claims it has since disbanded.

In an interview with The Associated Press on the same day Blair met with his moderate co-religionists, Choudary blamed Blair's government and its "crusader views" of Muslims for the July 7 suicide bomb attacks against the London subway and a double-decker bus.

He also said the British public shared the blame for ignoring al Qaeda leader Osama bin Laden's warning last year that Britain would be attacked if it did not withdraw troops from Iraq and Afghanistan. And he lit into Blair's meeting with the moderates.

"This is not the time for talking, it's time for action," he said. Blair, he added, has "got to do something (about the policies) which have caused 7-7," as the attacks that killed 56 people and wounded 700 are sometimes called here.

The Muslim leaders who met with Blair did not represent the Muslim community in Britain, Choudary said. He dismissed them as hand-picked by the government for their agreement with Blair's foreign and domestic policies — which he claimed were the root causes of the London bombings.

Had Blair tried to meet with Omar Bakri, the radical preacher and founder of Muhajiroun, and a verbal supporter of suicide attacks in Israel, it would have been "a very different picture," Choudary said.