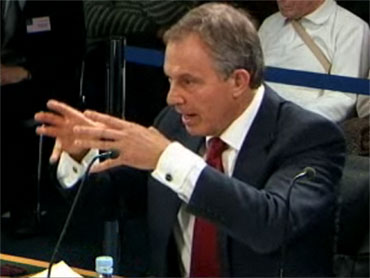 An unrepentant Tony Blair defended his decision to join the United States in attacking Iraq, arguing Friday before a panel investigating the war that the Sept. 11, 2001 attacks made the threat of weapons of mass destruction impossible to ignore.

The leader was questioned about whether he gave President George W. Bush an early, firm assurance that British troops would join U.S. forces in an invasion of Iraq without consulting Parliament or the public.

Earlier testimony has revealed that a parade of government lawyers and top British diplomats agreed the war would be illegal without a United Nations Security Council resolution specifically authorizing the use of force, but were overruled by Blair.

[Former British ambassador to Washington Christopher Meyer told an earlier hearing that an agreement had been "signed in blood" by Mr. Bush and Blair during a meeting at the president's ranch in Crawford, Texas, in April 2002.]

"The only commitment I gave - and I gave this very openly at the time - was a commitment to deal with Saddam," Blair said. He said military options were discussed, but said he told President Bush that Britain wanted to exhaust diplomatic routes before an invasion was considered.

Blair said he had not been determined from the outset to remove Saddam Hussein.

"The absolutely key issue was the WMD issue," not regime change. But he added that "if necessary - and there was no other way of dealing with this threat - we were going to remove him."

Blair said other world leaders did not share his and Mr. Bush's enthusiasm for confronting the WMD threat, even after the Sept 11 attacks.

"Although the American mindset had changed dramatically - and frankly mine had as well - when I talked to other leaders, particularly in Europe, I didn't get the same impression."

Blair acknowledged that the decision to join the war - which led to the largest public protests in a generation in London - had met with opposition in the country, and in his own Cabinet.

"The one thing I found throughout this whole matter from a very early stage is that I was never short of people challenging me on it," Blair told the panel.

The former British Prime Minister said that before Sept. 11 he thought "Saddam was a menace, that he was a threat, he was a monster, but we would have to try and make the best of it."

The attacks on New York and Washington changed everything, he said.

"After that time, my view was you could not take risks with this issue at all," he told the five members of the Iraq Inquiry.

The attacks "really changed my perception of risk, my calculus of risk," said Blair.

He said the possibility of terror groups like al Qaeda obtaining weapons of mass destruction via a hostile country was too great to ignore.

Blair said it was the nature of the Saddam Hussein regime, and the losses of life in prior years - during the Iran-Iraq War, attacks on Kurds, the invasion of Kuwait, and domestic political killings - that colored his views about the threat of weapons of mass destruction.

Blair's government has been criticized for publishing a dossier in 2002 asserting that Saddam Hussein posed an imminent threat because of his chemical and biological weapons capability, including missiles that could be launched within 45 minutes. Those claims proved false.

"What was the quality of the intelligence?" Sir Martin Gilbert asked Blair.

Blair responded that he believed Saddam had continued to produce chemicals and biological weapons. "I did believe it, I believed it beyond doubt."

This is Britain's third and widest-ranging investigation of the conflict, which triggered huge protests and left 179 British troops dead. The British military withdrew from Iraq last year.

It is not intended to apportion blame or hold anyone liable for the conflict. But it could embarrass American and British officials who argued - wrongly - the war was justified because Iraqi leader Saddam Hussein was developing weapons of mass destruction and building ties with al Qaeda.

The inquiry isn't meant to assign blame for the war, or to decide if there was criminal conduct in pursing it, reports CBS News correspondent Richard Roth. But more than political theater, it's bound to have implications for Blair's beleaguered Labor Party - facing elections four months from now.

Blair's 2003 decision to join former U.S. President George W. Bush in the Iraq war has been blamed by many for cutting short his political career.

Emotions ran high outside, where demonstrators chanted and read the names of civilians and military personnel killed. Some 150 protesters shouted "Jail Tony" and "Blair lied - thousands died," as police officers looked on.

"Blair should not be here giving his excuses for the illegal war, he should be taken to The Hague to face criminal charges because he has committed crimes against the Iraqi people," said protester Saba Jaiwad, an Iraqi who opposed the war.

Reg Keys, the father of a British soldier killed in Iraq, told Roth that the point of the entire process is to ensure that both the country and its politicians learn a lesson.

"A British prime minister must never again be allowed to take us to war based on falsehoods and deceit in such a shambolic and catastrophic way," said Keys.

At the beginning of his six hours of testimony Blair appeared somber, but grew feistier as the day went on - gesturing, smiling and, at times, correcting what he saw as the flawed questions of panel members.

The audience in the hearing room included family members of soldiers and civilians killed or missing in Iraq - all of whom sat quietly as he testified.

Rose Gentle, whose 19-year-old son Gordon was killed in Iraq in 2004, said she felt revulsion at Blair's presence.

"Actually, I felt sick," she said. "He seemed to be shaking as well, which I am pleased about - the eyes of all the families were on him."

"I hold this fear stronger today than I did back then because of what Iran is doing," Blair told the inquiry. "A large part of the destabilization in the Middle East today comes from Iran."

For more info:
The Iraq Inquiry