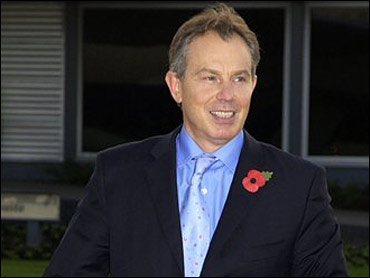 Prime Minister Tony Blair on Tuesday put the fight against crime and terrorism at the center of his campaign for a third term in office, pledging to fast-track plans for national identity cards and a new police agency similar to the FBI.

With national elections expected in May, the government wants to appear tough on law and order, and security lay at the heart of its legislative program unveiled Tuesday.

"The fact is that the threats faced by this country and every other major country round the world are real," Blair told the House of Commons as he outlined plans for a compulsory ID card by 2012.

"This is a big change, but frankly with terrorism, illegal immigration and organized crime ... identity cards in my judgment are long overdue."

Political opponents accused ministers of creating a climate of fear — similar to a charge that Democrats leveled against U.S. President George W. Bush.

"It is clear that they are trying to raise the fears from terrorism in the country at the present time," said Liam Fox of the main opposition Conservatives. "Now I think that is quite despicable, but it is a desperate government."

In a ceremony rich in pomp and pageantry, Queen Elizabeth II outlined to Parliament the government's legislative agenda for the coming year. Reading from a speech written by ministers, she unveiled plans for a Serious Organized Crime Agency to crack down on drug gangs, people-traffickers, major fraudsters and internet pedophiles. The agency has been dubbed the British equivalent of the U.S. Federal Bureau of Investigation.

The government promised draft counter-terrorism legislation and has said it wants to introduce special anti-terrorism courts without juries and allow phone-tap evidence in trials if it wins re-election.

The government's legislative priority is to pass a law allowing a national database of names, addresses and biometric details — such as fingerprints and iris scans — of everyone living in Britain.

Officials say that the accompanying national ID cards, the first in Britain in more than half a century, will help tackle identity theft, illegal immigration and benefit fraud. Ministers hope to phase them in by 2007, and make them compulsory by 2012.

Campaigners fear the cards will erode civil rights, and accused the government of using the threat of terrorism to push through draconian measures.

"The creation of a national database, which is bound to grow over time, is the moral equivalent of bar-coding the entire population," said Mark Littlewood, of the group "NO2ID."

The Queen's Speech was preceded by a leak from a government source who claimed that police and security agencies had thwarted a Sept. 11-style attack in London that allegedly targeted Heathrow airport and three skyscrapers in the Docklands development of east London. Reports in the Daily Mail and ITN television did not say when the plot was thwarted, nor how advanced it was.

Ministers insisted the government was not trying to scare voters.

"I reject entirely the idea that this is pandering to fear," said Peter Hain, the government's leader in the House of Commons. He appeared to confirm, however, that the government was trying to outflank the Conservatives on law and order issues in the run-up to elections. "We are crowding out any space for them on the security agenda," he told reporters.

Despite widespread public opposition to the war in Iraq, Blair's Labour Party is comfortably ahead in opinion polls and expected to win a third term in office — something no Labour government has ever done.