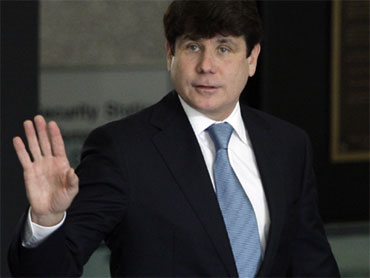 The judge in the federal corruption trial of former Illinois Gov. Rod Blagojevich has sent the jury home for the day.

Adam told Zagel that he intended to tell jurors about all the witnesses prosecutors did not call, even though the judge previously warned him not to do so.

Adam also says he would be willing to go to jail for contempt if the judge didn't change his mind.

Earlier in the day, a prosecutor focused on shooting down defense arguments in Blagojevich's corruption trial during his closing argument Monday, telling jurors that the former Illinois governor need have made no money or gotten a high-profile job in order for his alleged schemes to be illegal.

Assistant U.S. Attorney Chris Niewoehner told jurors that they shouldn't be concerned whether Blagojevich actually managed to trade the appointment to President Barack Obama's old Senate seat for an ambassadorship or a Cabinet post or any money - only that he made the effort.

"You don't have to be a successful criminal to be a criminal," he said.

Many jurors jotted down notes as Niewoehner spelled out what specifically they should be looking at in trying to match evidence with each of the 24 counts against Blagojevich.

The governor, in debt and desperate for money, tried to shake down everyone from Obama to a racetrack owner to a children's hospital executive, Niewoehner said as he methodically reviewed the highlights of the seven-week trial.

Blagojevich "needed this golden ticket," he said, echoing the "golden" wording jurors heard Blagojevich use in one of the most famous of the secretly recorded FBI wiretap tapes played at the trial.

On a large screen, he displayed a list under the headline, "Blagojevich Actions in Senate Shakedown." Blagojevich wanted Obama to give him a Cabinet post in return for appointing Obama's friend Valerie Jarrett to the Senate seat, and ordered aides to negotiate with people he believed were White House emissaries, prosecutors said.

Niewoehner said jurors heard Blagojevich try to shake down Obama for a job, heard him trying to get a $100,000 campaign contribution in exchange for signing a racetrack bill and trying to shake down a children's hospital executive for another contribution.

And, he said, Blagojevich lied to the FBI about the alleged schemes.

Niewoehner also appeared to anticipate defense arguments that Blagojevich didn't know whether his actions were illegal, noting that the impeached governor was a former prosecutor himself and also passed an ethics exam when he became governor, and continued to take and pass them.

The prosecutor said Blagojevich ramped up his alleged moneymaking schemes in late 2008 because a new ethics law taking effect on Jan. 1, 2009, would have limited the amount of money he could accept from people and businesses doing business with the state.

Niewoehner also urged jurors to "follow the money," citing witnesses who spoke about how money was "laundered" through now-convicted fundraiser Antoin "Tony" Rezko and eventually given to Patti Blagojevich as bogus commissions for real estate work.

He also said that by the end of 2008, Blagojevich's personal debt had climbed 400 percent in six years. Niewoehner said Blagojevich's money woes also were because he spent elaborately on himself and his wife.

The prosecutor said that the people who previously had helped Blagojevich raise money essentially had to stop their fundraising because of FBI investigations into his inner circle.

Blagojevich, Niewoehner said, was "at the center of corrupt individuals."

"When you agree with someone else to commit a crime, you committed one," said Niewoehner, raising his voice slightly. "Talking is the crime, ladies and gentlemen."

Blagojevich's attorneys said their message to jurors will be simple: "First and foremost, the government has proved nothing," Sam Adam Jr. said over the weekend.

Blagojevich has pleaded not guilty to scheming to trade or sell Obama's old Senate seat and illegally pressuring people for campaign contributions. If convicted, he could face up to $6 million in fines and a sentence of 415 years in prison, though he is sure to get much less time under federal guidelines.

His brother, Nashville, Tenn., businessman Robert Blagojevich, 54, has pleaded not guilty to taking part in the alleged scheme to sell the Senate seat and plotting to illegally pressure a racetrack owner for a $100,000 campaign contribution.